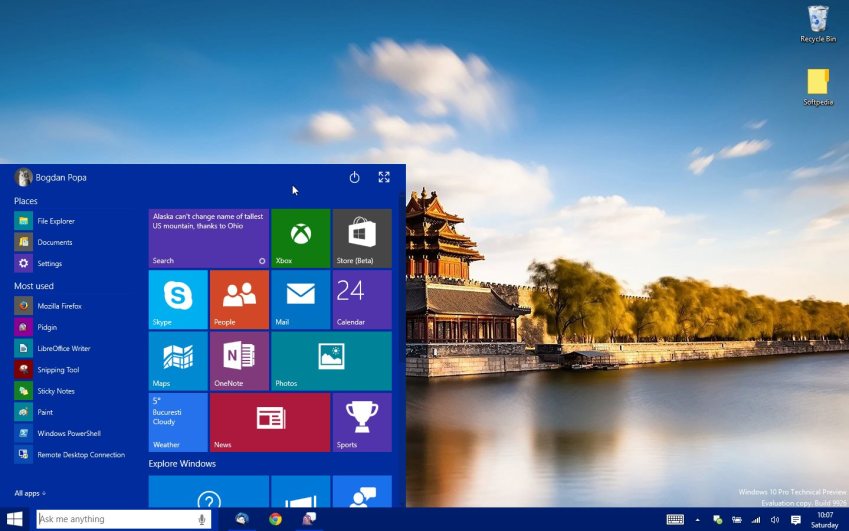 Microsoft has announced the next generation of its operating system, Windows 10, is due to be released on 29 July. Here are 10 things you need to know about the software giant’s latest OS.

1. Customers running Windows 7 and Windows 8.1 will be able to upgrade to the next-generation OS for FREE

2. Operating across all PCs, Tablets and Smartphones, it will feature the return of the Start Menu (which was removed in Windows 8), complete with new Live Tile animation.

4. Windows 10 will incorporate a new browser called ‘Edge’ – although the ageing Internet Explorer will also be bundled with Windows 10.

6. Personal assistant Cortana – a rival to Apple’s Siri – is now more deeply integrated with the Start menu. Cortana will take over once you search in Start Menu and come back with the results. It will also answer questions while a user is still typing and you can apparently ask it for a joke!

7. Just as Apple’s OS X comes loaded with iTunes, Movie-maker, the Photos app, etc. Windows 10 will also come with Music and Video Preview which are getting an update, including a full screen for the Music app. The Video Preview app will now be able to re-download videos any number of times for up to three devices. Microsoft says it plans to increase the number of devices that users can download on.

8. Office on Windows gets a makeover with Windows 10 users able to experience new universal Windows applications for Word, Excel, and PowerPoint, all available separately. One improvement is that you can create or update spreadsheets in Excel without a keyboard or mouse. You will also be able to enjoy new versions of OneNote and Outlook, which are included with Windows 10 at no additional cost.

9. The Xbox App for Windows 10 has new features like Game DVR for PC games, screenshots, a Live Tile, user profiles, and real-name sharing. Also users will no longer need to separately download drivers for the Xbox controller as they will be pre-installed on this build.

10. With Windows 10, Microsoft wants to gain one billion new users. In order to do that, the company is making it easier for Android and iOS apps to run on Windows 10 and has released four new Software Developer Kits (SDKs) supporting apps written in Web, .Net and Win32, Android C++/Java and Apple iOS Objective C. This will allow developers to bring all their apps to Windows 10 platforms.

Windows 10 Taskbar not working? Then check out Techloris.com