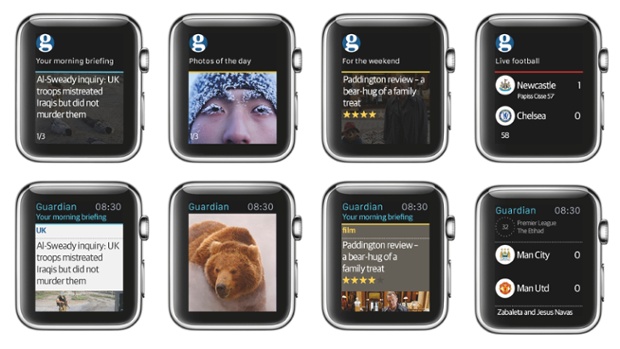 There’s nothing media companies love more than a new technology platform. Mobile phones were going to save the whole newspaper industry, and then when the iPad launched it spawned thousands of tablet editions of magazines. Are you still reading them? Probably not.

So right now there is a huge buzz about the impending launch of the Apple Watch. Newspapers have been sizing up smart watches for a while. In fact the FT has already debuted a really interesting app for Android Gear watches that uses a technology called Spritz. This works by scrolling words in front of your eyes rather than the reader having to push the words down the screen. Its champions say that it enables the user to read content on small devices three times faster than they would do with traditional scrolling.

Equally as fascinating is The Guardian app for the Apple Watch which is due to launch imminently. It is based around a concept called Moments which works to deliver notification of key stories at certain times of the day.

As The Guardian puts it, ‘So in the morning you can expect a quick briefing to catch up with the news, a beautiful gallery to distract you while the kettle boils for your afternoon tea, a match update if your favourite football (soccer) team is playing, or a reminder in the evening for an article you saved to read later. Moments are always fresh, compelling, and useful.’

The Guardian is also offering content beyond the headlines on the watch. So you can, if you want to read the whole story on your watch. I am not too sure how many people will do this beyond short stories though. It probably makes more sense in most circumstances for a user to pull out their phone and start reading. The app will also display images- though what they will look like on the watch’s tiny screen is another matter, as well as things like recipes.

It all sounds very ambitious and fascinating. And in many ways media companies – the New York Times and CNN also have apps on their way – have to innovate to stay ahead. But given the alleged battery limitations of the Apple watch and its relatively small screen (compared with smartphone) will anyone ever use it for anything more than notifications from the media?

It will be fascinating to see how this one develops.