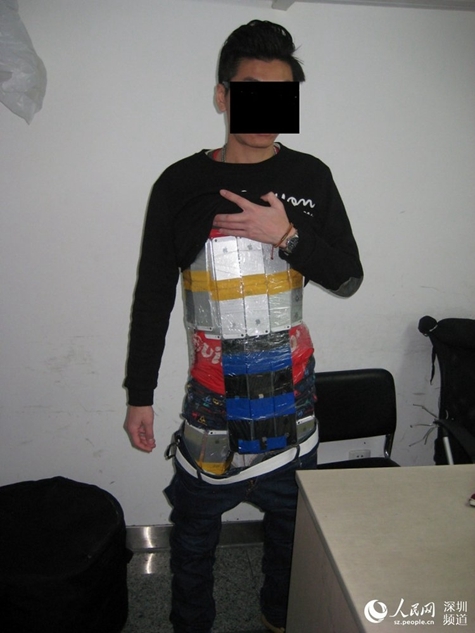 It’s like he’s more phone than man. Hong Kong’s customers officers found the chap above, trying to smuggle *NINETY FOUR* iPhones on his person. I bet he wasn’t pleased when Apple announced the iPhone 6 Plus.

The story comes from Sina News, and according to the ropey Google translation, which you can see below – it seems that when he passed through a metal detector, “the instrument was issued a loud alarm information”. No shit. 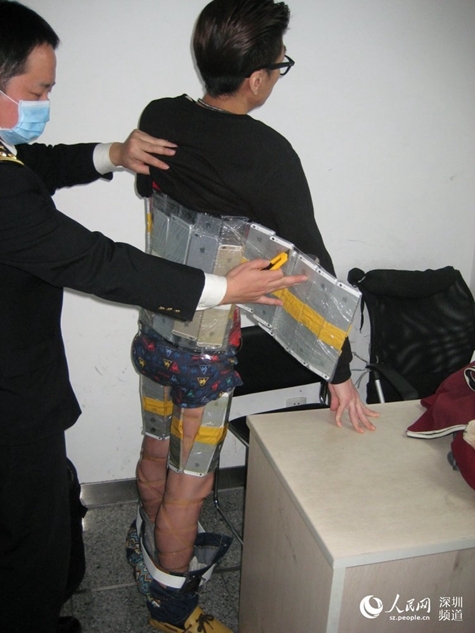 “Field officers stopped their routine inspection, found no suspicious items in their carry-on baggage. When customs officers allowed through the metal detector gate, the instrument was issued a loud alarm information. Inspection found that the passenger chest, abdomen, cross-department, thigh, calf wrapped with a lot of Apple phone. The Hong Kong man total personal tie to the Tibetan way of smuggling 94 Apple phone. The picture shows a man strapped to a mobile phone.

“Customs staff followed by the transfer of immigration records revealed that the man was in Hong Kong, there are multiple violations belongings were seized customs records, is a typical “water off.” Same as the case tied to the personal possession of smuggled electronic products, etc. immigration act, “water” were the most common hiding, camouflage smuggling techniques, but also customs prioritized target. Pictured men like to wear “mobile armor.”

“It is understood that since last December, just over a month time, Huanggang Customs at Huanggang Port and Futian Port under the jurisdiction of the immigration entry site, iPhone series phones seized 282, CPU888 block, SD card 4088, IC2500 grain , U-840, are small, high-value electronic products. Pictured are seized by the police phone.”