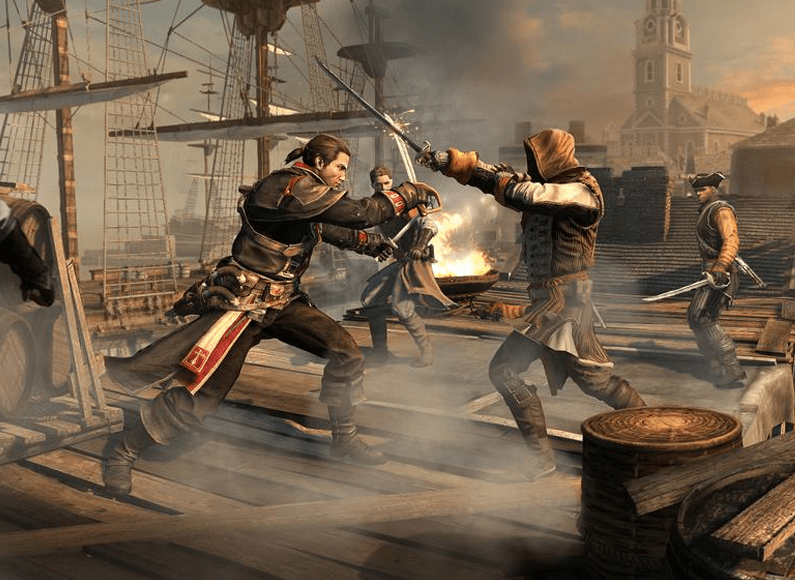 “It seems everyone likes the sailing sections in our game”, mused the Ubisoft executive one day, when reviewing feedback to last year’s Assassin’s Creed: Black Flag, “We should make sure there’s more sailing in the next game”.

“Great idea!”, said another executive as the rest of the board murmured in agreement. But just before they were about to break for lunch a lone voice spoke up. “But Sir”, the voice began, “our next game is set in Paris during the French Revolution – there wasn’t any pirates there!”.

And with that, Assassin’s Creed: Rogue was born. To keep things different, this title is counterintuitively being released exclusively for PS3 and Xbox 360 – so as not to take attention away from Unity… though I will be stunned if the game doesn’t receive a re-release on the new consoles some time next year.

You can tell too that Rogue was never Ubisoft’s main priority, as the game is almost identical to last year’s incarnation – as though all of the elements of last year’s game have been thrown into a paint mixer and jumbled around to create a new experience.

For Assassin’s Creed fans this may not be a bad thing: More sailing to do, more assassinations to carry out and more bloody tailing missions to get frustrated at. All of the elements are there.

What’s shocking though is just how lazy it feels in terms of what assets (3D models, etc) have been reused – and just how much polish it lacks. It has the feel of DLC or at best an expansion pack – and you’ll be constantly getting flashes of deja-vu as you jump through the trees, whistle to attract soldiers and chase down the same damn sea-shanties.

The game also appears to have more bugs in it than previous games in the series. Its almost as though half of the development team was off working an entirely different game. And whilst Unity has faced criticism about bugs, Rogue isn’t exempted. I’ve spotted characters a number of times floating in the air, for instance.

Where the game does have something going for it is on the story side. The game follows the story of Shay Patrick McCormack, who is a member of the Assassin’s Brotherhood, but after a (fairly spectacular) Lisbon Earthquake sequence switches allegiance to the Templars. It’s a nice twist on the games we’ve become familiar with – and offers some nice moral grey areas, rather than making the game about good vs evil – plus it builds on the game world’s lore, whilst providing the narrative link between Black Flag and Unity.

Mercifully too, the game keeps the “future” sequences rather brief. As with Black Flag, these are first-person experiences set in a games development studio that uses the Animus to create historical games. Presumably even the developers know that these bits are a distraction, and since the end of Desmond’s story seem to exist merely to provide consistency with previous games.

The setting is interesting too. This time the action has moved north to New York and the North Atlantic, which means whilst there’s plenty of scope for sea battles, the ocean is a more dangerous place with icebergs to dodge – and if you take a dip in the water, you’ll quickly find yourself freezing to death.

There’s also, as ever, plenty to collect in the game: Treasure chests, animal pelts and… pretty much everything makes a return from Black Flag. And if you’re like me, and like a big open world map full of activities to tick off, this isn’t necessarily a bad thing – you can satisfy your compulsive tendencies by trying to wipe everything off of the map. There’s also plenty of side quests and assassinations, in addition to the core plot.

In a sense, it is difficult to know exactly what to say about Rogue given it is all so familiar. Essentially, if you didn’t like the previous games in the series, this won’t be the one to convert you – and if you did enjoy Black Flag and want a bit more, well, that’s exactly what you’re going to get here.

The game is all of the familiar Assassin’s Creed elements, yet somehow it doesn’t quite add-up to something great.

For a game that calls itself “Rogue”, perhaps this Assassin’s Creed plays by too many rules.