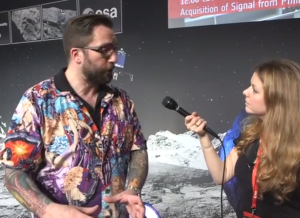 Whilst the internet has profoundly transformed all of our lives in many ways, one of the changes we’re still getting to grips with is the phenomenon of viral growth – and how in mere minutes someone can go from obscurity to the Facebook walls of millions. This means that almost every day, some lucky or unlucky person wins the viral lottery, and becomes the centre of attention. Needless to say, a lot of the time, this isn’t motivated by support for someone – but by anger.

The most recent victim of this phenomena has been Dr Matt Taylor, the project scientist on the European Space Agency’s Rosetta Mission – for two reasons. He became the centre of attention because he was one of the key figures behind the successful landing of a probe on a comet – which was a first for humanity. It was also because he was wearing a shirt.

The shirt was controversial because it was covered in images of cartoon women dressed… well, let’s just say, less than entirely progressively. As pictures of him at the ESA Operations Centre circulated around the world, this led to thousands of tweets and gallons of virtual ink was spilled by people arguing over the meaning of the shirt: Was it sexist? Does it represent a culture of sexism in science? Will it put off women from wanting to work in the already male-dominated field? Why didn’t anyone higher up warn him? Is it evidence of systematic failings?

And then there was the reaction to this criticism – and the reaction-to-the-reaction: Was it wrong for everyone to pile on Dr Taylor? Should he have had to apologise? Why don’t the people complaining concentrate on something more important? Why don’t the people annoyed with the complaints recognise that Dr Taylor isn’t getting anywhere near the level of abuse that prominent women on social media routinely receive? Did the pile-on even happen?

There have been claims that the reaction to Dr Taylor was actually rather muted, with all dissent being broadly respectful. Whilst this is true for tweets directed at his specific Twitter account, it is impossible to deny that “Shirtgate”, or the brilliantly-named “Shirtstorm” has certainly provoked a lot of debate. Google News is currently reporting over 73,000 results for Dr Taylor’s Shirt. For the rest of Taylor’s life, Googling his name is going to result in mentions of the shirt – his Wikipedia page forever tarnished by it, and his obituary not just reading “World class space scientist” but also “controversial fashion icon”.

Regardless of the merits of all of the competing claims – which I’m not going to wade into here. I think it is illustrative of a phenomena that social media is forcing us to confront. As social media is still so new, no one has written the implicit social etiquette yet on many of the new situations it creates – and the Shirtstorm and similar pile-ons suggests that we’re increasingly going to have to figure out a way to deal with the idea that bad outcomes can arise even if everyone is behaving ‘ethically’, or within the ethical rules of a system. This makes assigning blame difficult – and this is why we should always be cautious of social media pile-ons.

Perhaps the best known example of a bad outcome deriving from everyone playing by the rules is the “tragedy of the commons“, but the phenomena is replicated in many aspects of human behaviour: it is completely reasonable for countries to maintain armies to protect themselves, but the existence of armies can inadvertently lead to competing militarisation and start wars (see WWI), for example. Everyone wants the latest iPhone on launch day and are entitled to go and buy one – but as a result there is a lot of queuing, and stock may even run out – bad outcomes that cannot be pinned on the actions of any one individual.

How does this relate to the Shirtstorm? Essentially because – as most of the complainers acknowledge – it is stunningly unlikely that Dr Taylor is actually a bad person, who spends his evenings trying to figure out the best way to hinder the progress of women in science (after all, he has a spacecraft millions of miles away to sort out). For Dr Taylor, he played by the rules: He wore a shirt that was presumably viewed as acceptable by his colleagues and friends and by his own conscience. He went to work without considering the potential broader implications. A bit like how when you buy a phone that was made in China, you’re probably not thinking about the many problems that globalisation has created, or how your purchase perpetuates the exploitation of workers in developing countries by western corporations acting as neo-colonialists – even if this exploitation is a necessary condition for us to have new phones in the first place.

This doesn’t make wearing the problematic shirt the right thing to do when viewed in the broader context – but at the same time, it doesn’t make Dr Taylor the bad guy. He was, like his colleagues, playing by the rules of the game he was a part of (the game being “working at the ESA as a scientist”) – but there was still a bad outcome (“a shirt, that can be viewed as sexist, arguably further perpetuated certain cultural assumptions about women and science”).

Arguably, Gamergate is also an example of the same phenomena: In that mess, an undue focus was given to developer Zoe Quinn, who became a symbol of the ‘problem’ the Gamergaters saw. Without making value judgements over the specific allegations (I haven’t followed it closely enough to comment), Ms Quinn was playing by the rules – friendships between developers and games journalists is common. Of course – Gamergaters would argue that this is representative of a broader problem (either “ethics in games journalism” or “women being allowed to exist”, depending on who you ask). This is similar to how the shirt is representative of a broader problem in science. It doesn’t mean that Quinn specifically deserves the completely vile threats and abuse she has been receiving. Needless to say, she’s had it about ten million times worse than Taylor.

This doesn’t (necessarily) make any perceived closeness between developers and journalists right – but once again there is a bad outcome (perceived poor “ethics in games journalism”) despite everyone (all developers and games journalists) playing the by same rules. So in both the cases of Taylor and Quinn, neither deserve the attention, scrutiny or criticism they have received. And even if you disagree with my specific examples, and believe either the Shirtstorm or Gamergate to be battles worth fighting, surely you can at least appreciate the distinction I am drawing between who committed the “crime” and who deserves the “punishment”?

In fact, the endemic sexism in society, and the fact that Quinn has received so much more abuse than Taylor is another example of bad outcomes from everyone playing by the rules – whilst most people would hopefully deny being sexist, and believe themselves to behave ethically, endemic sexism in society is an outcome that can’t have blame pinned on any particularly individual – but rather is an outcome from the cumulative effect of many billions of individual actions.

With Twitter storms becoming regular occurrences, and every day people having their life negatively impacted by the attention of the mob, this is something we’re going to have to figure out what to do about. Perhaps we will have to develop new norms? Perhaps there will be a cultural shift so that our threshold for outrage is raised significantly? Or perhaps we’ll start feeling greater empathy with the individual victims who the social media hive-mind deigns to pick out of the crowd, even if we profoundly disagree with them? Perhaps we’ll learn how to respect nuanced opinions rather than see the world as good vs evil? (Nah, only joking). There is also the inherent problem of exactly how you can tackle a problem like endemic sexism in science or society, if calling out specific individuals creates disproportionate blame. I don’t have any ideas for a solution to this – but I hope that one can evolve as we grow used to a post-viral world.

Perhaps we’ll just keep shouting at each other forever?