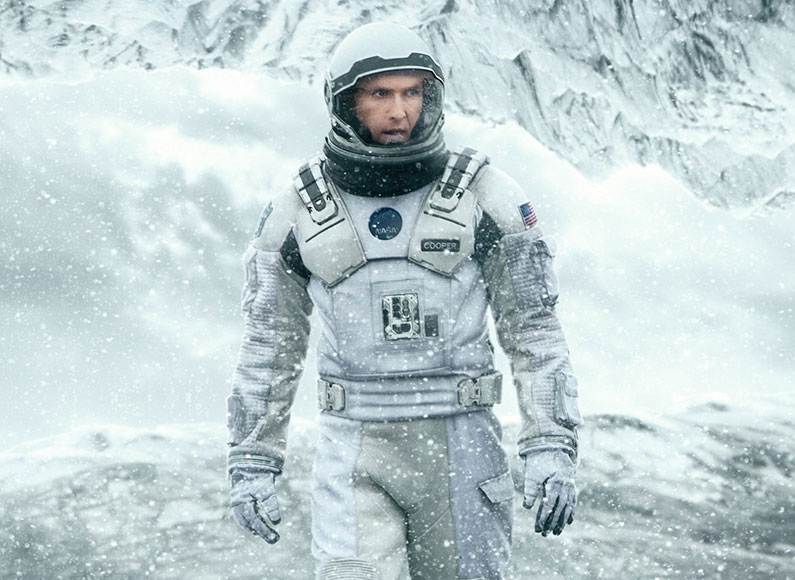 Interstellar, which originally had Steven Spielberg attached to direct, is the story of a near future in which humanity on Earth is on the brink of extinction. A group of explorers, led by former test pilot turned farmer Cooper (Matthew McConaughey) makes use of a newly-discovered wormhole to search for a new planet that can sustain human life …

Interstellar is a big, bold film full of big, bold ideas that harks back to an earlier golden age of science fiction. And it’s clear that some of these earlier films have had an influence on director Christopher Nolan.

Here now are five of them …

The biggest influence is clearly Stanley Kubrick’s classic 2001: A Space Odyssey. Both films have the central premise that mankind’s future is out in the stars, not here on Earth. There are many visual references throughout, the most noticeable of which being that The Endurance, the Interstellar crew’s mothership, is similar in many ways the orbital space station in 2001. There are also a couple of robots in the film that will remind you of the monolith. Oh, and don’t forget the underrated sequel, 2010, either.

Nolan himself has admitted the influence of 2001 in an interview with a film magazine: “Science-fiction fans are going to spot all kinds of references, but I don’t think it gets in the way of the film. It doesn’t for me, anyway.”

The pivotal message of both films, though: that it does not matter how far out into space we go, we must not forget what it is that makes us human.

The epic film version of Tom Wolfe’s book depicts the birth of the US space programme. McConaughey’s Cooper in Interstellar harks back to Sam Shepard’s portrayal of  test pilot Chuck Yeager in The Right Stuff, and the filmmakers made sure to view it again before they embarked on production.

“What they did in-camera, with all these great projections through windows, so you’ve got the real reflections in the helmets and all that,” Nolan told a film magazine. “You know, we just looked at that and I said, ‘Guys, it’s so much easier for us to do that now than it was for them. So we have no excuse not be doing these things in-camera. We can’t just throw it all to the visual effects guys.’ And we didn’t.”

Close Encounters of the Third Kind

A father receives a coded message and sets of to find out who or what sent it. Yup, that happens in both films, and both films also have family at their heart. (Interstellar, though, has a lot less mashed potato.)

“When you think of Close Encounters, when you think of all [Steven Spielberg’s] other movies, there’s just a great spirit to them that I wanted to capture,” Nolan told a film magazine. “There’s a language to those films that’s very classical, almost old-fashioned, and Spielberg and Lucas and all those guys just did it so well.”

Nolan made quite a few films before Interstellar (you do remember his Batman trilogy, don’t you?), but the film from his back catelogue that has had the most influence on this space epic is clearly Inception. That film heavily influenced how Nolan plays around with time and space – and some critics have even called Interstellar “Gravity meets Inception”.

The film version of the Carl Sagan book about humanity’s first contact with extraterrestrial life stars Jodie Foster as a scientist who discovers an intelligent signal broadcast from deep space.

Both films tackle big sci-fi concepts from a real-world perspective. Both films deal with space travel via wormholes.  Both films have, at their centre, the relationship between a father and his daughter.

Oh, and both films have got Matthew McConaughey in them…

One thought on “Five films that influenced Christopher Nolan’s Interstellar”