Facebook has announced plans to help fight ebola – both by soliciting donations from around the world, and by offering advice directly to people in the area who may be affected.

First off, Facebook has updated the news feed so that if you’re in one of the impacted places in West Africa, you might be shown a warning message offering advice on symptoms and what to do:

Note that the above screenshot, supplied by Facebook, shows the message an older/cheaper feature phone – exactly the sort of phone that might still be used in West Africa. Good thinking, Facebook.

For those of us in the rest of the world Facebook will be prompting us to donate – and helping walk us through charitable donations: 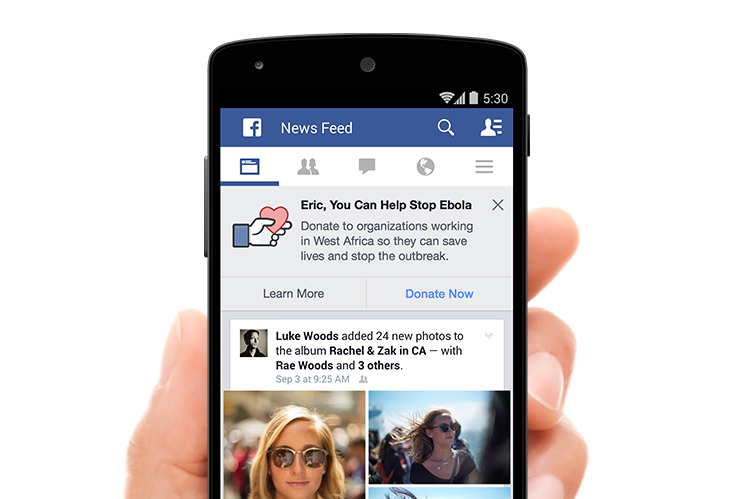 And finally Facebook is putting its money where its mouth is, and also donating some mobile technology to help aid workers stay connected:

“Working with NetHope, a consortium of 41 leading international NGOs, we are donating 100 mobile satellite communication terminals for deployment in remote areas of Guinea, Liberia and Sierra Leone and to provide voice and data services that meet the highest priority needs of medical and aid workers. These terminals, called Broadband Global Area Network devices, communicate via satellite and provide mobile broadband and telephony services.

“Focusing on areas where there is little to no existing communications capacity, NetHope will deploy these terminals to help medical and aid workers with contact tracing, communication, case management and community mobilization. Response organizations estimate that for each patient, at least 10 other people will provide health care, contact tracing and other services that may require telecommunications — and improvements are most important in rural areas where infrastructure is weakest and case loads are highest.”