If you’ve got an iPad Air, then you’re probably looking at the iPad Air 2 and wondering “should I upgrade?”. It’s a good question – and here’s the stats to help you decide. 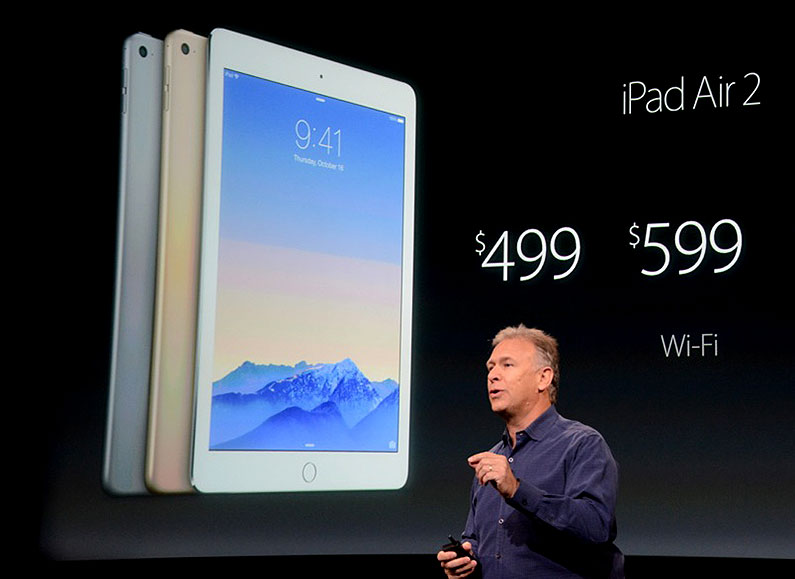 First off, how does it feel to hold? As Tim Cook boasted, the Air 2 is even thinner than the Air – 6.1mm down from 7.5mm… which is impressive but not that significant – its about the width of a credit card in thickness. This has also shaved off a little bit of the weight – its 437g, down from 469g. That’s 32g lighter, which according to Google is the same weight as this bracelet, or one mole of oxygen gas.

The screen has also had an anti-reflection coating added, which should mean less glare when using the device in sunlight and so on.

There is of course a number of hardware upgrades. The camera in the iPad Air 2 is 8MP, up from 5MP, and the new camera supports timelapse video – just like the iPhone 6.

The wifi chip has been upgraded to 802.11ac (instead of 802.11n) – what this means in layperson’s terms is that it will make your wifi even faster and more stable, if you have compatible router hardware.

The Air 2 is also the first iPad to feature Apple’s TouchID technology – in other words, fingerprint recognition, which can be used to make unlocking your device and paying for stuff much easier.

Unsurprisingly, the Air 2 has also added support for NFC – which will be used for Apple Pay, and could conceivably be used for other stuff in the future too.

What’s on the inside

The iPad Air 2 is powered by Apple’s latest A8X chip, compared to the iPad Air running on last year’s A7. This new chip boasts a number of enhancements – Apple claims it is 40% faster, and will have 2.5x as good graphics performance as what came before. It is also 64 bit – which should further speed things up.

Other than that, the device is rather similar to last year’s model. Whether it is worth upgrading it is up to you, but we’re not entirely sure it’ll be worth it.