Meet HitchBot. Sadly not a robotic reanimation of the late Christopher Hitchens, but a hitch-hiking robot that will be travelling across Canada over the next few weeks. 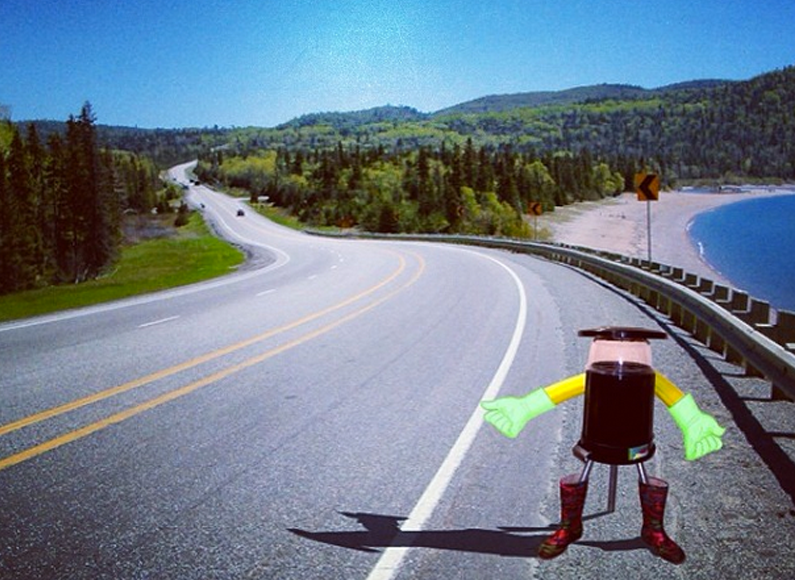 A creation of a number of Canadian universities, the hybrid art-project/social experiment/folly is capable of talking and interacting in conversations with the people who pick it up along the way. Perhaps it is a bit like if Siri were given a body. Apparently it will even take photos and post them to Instagram – after asking for permission. Whether it’ll be slightly more upbeat than Marvin the Paranoid Android from Hitchhikers Guide to the Galaxy remains to be seen.

The plan is for HitchBot to hitch a ride from members of the public between Halifax, NS, in the East and Victoria, BC in the west of the country.

David Harris Smith, the assistant professor who devised the project told the CBC:

“Hitchbot is travelling across the country, and it’s collecting stories as it goes, too. So it will ask if they have a story that they’d like to tell about travelling or hitchhiking”

“As we move into a world where we are going to be interacting with robots on a regular basis and we’re going to find ourselves in areas of our social life, assisting our [aging] parents, for instance … These robots, in their design, they need to be respectful of social customs, of cultural attitudes etcetera.”

So perhaps there is a worthy reason for doing it after all: We could learn more about humans interact with robots.

Apparently the way it will work is that people who pick up HitchBot will be instructed to strap it into their car – and charge ‘him’ using the 12V cigarette lighter socket. It’ll be equipped with 3G and GPS so that they can keep an eye on things back at base too.

Apparently Smith also told Canadian radio that “I think anyone who steals it, might have some second thoughts … look at how annoying it is” – which might go some way to explain why he’s trying to get rid of it by sending it to Victoria.