Twitter is the greatest thing to happen to celebrities since… well… ever. No longer do those in the public gaze have to rely on an unreliable media to shape their public image, and have journalists mediate the interaction between the well known and the great unwashed. Twitter provides a direction connection between celebrity and fans – and allows the celebrity to reshape their public image for better… or for worse. 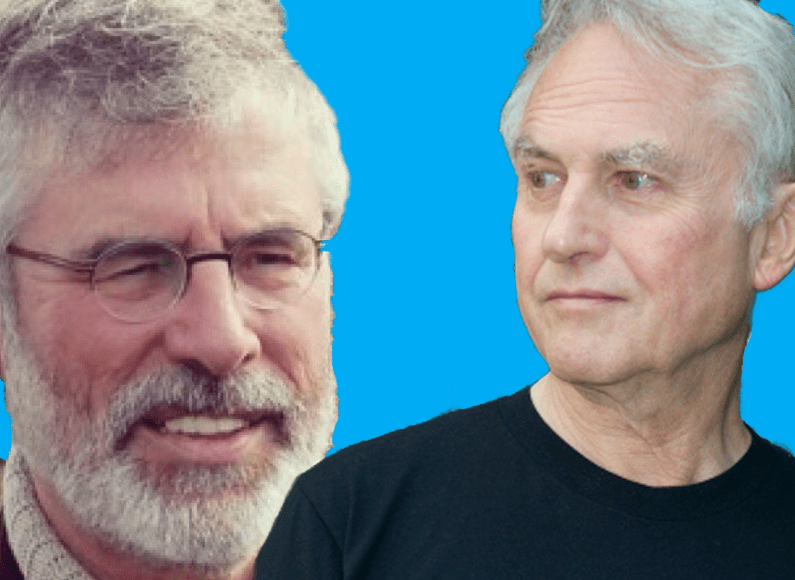 What’s pretty astonishing is just how it can change your perceptions of a well known figure. Take the dual examples of Richard Dawkins and Gerry Adams.

Back in the 1980s, Richard Dawkins was a respected Oxford University Professor, and one of the world’s leading voices on evolutionary biology. After crafting several brilliant tomes that explained the origins of life to lay people, he became well known in the wider world too. The Selfish Gene, The Extended Phenotype and The Blind Watchmaker transformed the public’s understanding of science and taught them a lot in the process. Dawkins was on his way to being a national treasure, in the same way that David Attenborough is today.

Meanwhile, over in Northern Ireland Gerry Adams was a hugely divisive and infamous figure. In 1983 he became the President of Sinn Fein, and a thorn in the British government’s side. He was also alleged to have had links to the IRA, and has even been alleged to have been involved in one of the group’s murders. In short, he was viewed by the British establishment as one of the most dangerous men in Britain. So dangerous was he that the British government took the draconian step of banning his voice from British airwaves, as they were so concerned about what he would say. (In the event, broadcasters simply responded by broadcasting his words read by an actor).

Fast forward twenty years or so and both figures have had a remarkable transformation – partially down to the remarkable power of social media.

For the longest time, I was a staunch defender of Dawkins after he published The God Delusion. People called him grumpy and angry, but I just saw a kindly grandfather figure putting across sensible arguments. And then he joined Twitter.

Almost every day, there’s a new Dawkins-related furore, where he has said something controversial and the masses of Twitter have reacted. Today, for example, he has been offering his opinions on rape:

Date rape is bad. Stranger rape at knifepoint is worse. If you think that's an endorsement of date rape, go away and learn how to think.

Yes, I can imagine circumstances where rape by a friend is worse than by a stranger. The logic remains. It doesn't imply approval of either.

This is quite a regular thing – with tweets about Islam in particularly leaning slightly too far in the direction of “EDL-style bigotry” and away from “informed academic” than I’d like.

As you might imagine, the reaction is never pretty with thousands of people tweeting about him, and his comments leading to inevitable articles in the media, which keep the storm rumbling even longer (umm, sorry about that).

So what about Gerry Adams? Surely such a renowned firebrand would be taking to Twitter with all sorts of inflammatory rhetoric?

It turns out he really likes rubber ducks:

Ok. A bath it is! But I gotta get in without the ducks. Cudn't stick all that paddling. Especially with acrobats! pic.twitter.com/fRLgEVV6sN

How do they know its Friday night? All sitting waiting 4me2 fill the bath with soapy suds&Epsom salts.Tom&Ted time. pic.twitter.com/W2aGRc1Vyq

He also likes making cupcakes that look like his dog:

(His dog also tweets. I swear I’m not making this up.)

So there we go. Unfortunately, I don’t have a grand theory of what this means, or how Twitter shapes our perceptions of public figures but who’d have thought this would happen. The celebrated academic destroying his legacy with every tweet, and the guy who has alleged terrorist links positioning himself as Nelson Mandela with rubber ducks?

Are there any other twitter celebrities who surprise you? Let us know in the comments.

One thought on “Are there two stranger Tweeters than Richard Dawkins and Gerry Adams?”