Update (14:53): Milestone games has just got back to me – here’s what a spokesperson had to say:

I’d like to explain some interesting points that could be helpful to have a clear situation.

We read carefully facebook, twitter, steam and forums in order to address all the issue that users are currently experiencing.

We don’t usually answer to every single users, but we’re aware about their mood and we’re trying to work hard on a patch that will improve their gaming experience.

For sure we’re sorry about these problems and we’re taking care of our users experience. I can confirm that in these days it’s a priority.

Speaking about the DLCs, unfortunately it’s not up to us. We’ve experienced some issue and we’re trying to fix them, in order to make them public.

I can confirm you that DLCs have been already prepared and we’re waiting too. As explained, before, players are our main priority and their gaming experience always come first.

Update (13:51): Just minutes after I sent the company an email, this message “coincidentally” appears on the game’s official Facebook page:

Due to technical inconveniences the release date of Moto2-Moto3 and Laguna Seca DLCs on PS3, PS4 and Steam has experienced an unexpected postponement.
Milestone is deeply sorry about this time delay.

The company is focused on addressing and resolving this matter; an official announcement will be published as soon as we can communicate the new release date.

Thank you for your attention and feedback,
Milestone Team.

MotoGP fans aren’t happy with the recently released MotoGP 14 on PS4, PS3, Xbox 360, and PC. Claims that the company has released a broken game have been met with a wall of silence.

Prior to release, things were not looking good with developer Milestone shipping a game on disc that was only partially complete – with the promise of a day-1 patch for DLC patch for download to complete the game and presumably to fix any bugs. Trouble is – the patch didn’t seem to materialise.

Apparently the PC version is especially screwed – with gamers claiming that the graphics promised do not match up to reality. There have been complaints of missing HD textures, and claims that the game doesn’t run in HD, but merely 800×600, with a lack of anti-aliasing options. Another user claims that the PC version has omitted including a button to quit the game.

Judging by the social media reaction, one of the most consistent bugs is when the player ends up driving on the sky:

@MilestoneItaly what's happening here? I hope this is going to get patched? pic.twitter.com/mMhQIeblly

Perhaps most amusingly/bewilderingly (depending on how you look at it), the game apparently shipped missing a whole bunch of riders, despite earlier promises (and claims currently on the MotoGP 14 website) that the game featured the entire 2014 MotoGP line-up.

A colleague, who knows about MotoGP tells me that as I write there is currently a race underway in The Netherlands (in real life), and the riders currently in 2nd to 6th place are inexplicably missing from the game. This is contrary to the original release press release which claimed in the small-print that “the complete roster will be added as free DLC at Day1”. This, perhaps understandably, makes the campaign mode impossible to play.

Here’s what you see on the menus at the moment on a number of the riders, including many big names and the only female rider: 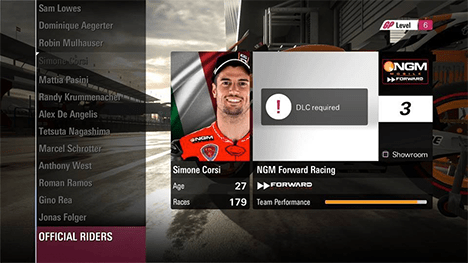 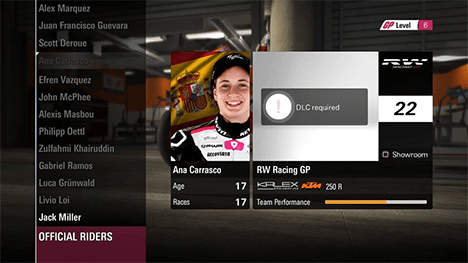 What’s perhaps most surprising is the silence from the developers. The company’s Twitter feed hasn’t addressed any of the complaints – only responding to one user. The Facebook page has too remained completely silent.

Hi @TrunkmanUK we are sorry for any inconvenience. The DLC was supposed to be released Day-one. We will update you within 48 hours

Though as I said above, gamers are still waiting for the patch that will make the game work. Could this be one of the most shambolic launches in recent video-game history? Move over, Sim City.

I’m currently attempting to reach out to Milestone for comment, though the company doesn’t seem to want to publicly publish contact details for the press on its website.