Influential digital rights activist Cory Doctorw, founder of Boing-Boing, is speaking at the Don’t Spy On Us conference in London today. Speaking to me earlier, he argued that the best way to combat mass-surveillance is by raising the cost by using encryption. 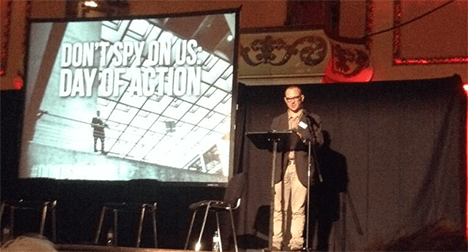 The Don’t Spy On Us conference was organised by a coalition of privacy groups and brought together the likes of Doctorow, Liberty’s Shami Chakrabati and Wikipedia founder Jimmy Wales to mark the first anniversary of the Edward Snowden/NSA revelations.

I got a chance to speak to Cory before he took the stage.

James O’Malley: It’s now a year after the Snowden story broke – are you now more optimistic or pessimistic about the future of privacy and the internet?

Cory Doctor: For me as an activist the thing I always ask is “what can we do to make the internet better for privacy and freedom and worse for taking those things away?”. I think Snowden affirmed some of our greatest fears about just how dire the surveillance was. The other thing Snowden said, and he’s the only person with inside knowledge who has spoken on this subject is that the NSA can’t break the crypto. That secrecy using cryptographic methods is intact for the foreseeable future and possibly forever.

The cryptographic maths are very, very sound, and what that means is that if we can figure out how to make people more interested in the project of being more private by default, of when you disclose something, disclosing it in a way just so the people you are disclosing it to and no one else can read it – even if [the NSA etc] intercept it then we make mass surveillance into a thing of the past.

Mass surveillance is only possible because it costs approximately nothing to add a new person to the surveillance network. Smari McCarthy pointed out recently if it cost $10,000 for each person you surveilled their entire budget would cover about 10,000 people – which is probably about the number of bad guys they should be keeping an eye on around the world.

So if we can raise that cost using a combination of technology and legislation and markets and norms [and] if companies that participated in it like Vodafone and BT assisting in the deep-sea fibre taps in Oman faced such intense liability from civil lawsuits along with legal restrictions, along with public disapprobation for their participation, along with technological challenges stemming from the use of cryptography it’d be a dead letter – there’d be no reason to stick the fibre taps in.

JOM: What’s the best thing people can do to help?

CD: If you go to resetthenet.org, there’s a set of tools you can use depending on whether you’re a web developer, or an internet user, or someone who’s life revolves around your mobile phone. Steps that you can take that will raise the cost of surveilling you. Not necessarily because you have any reason to fear surveillance although you might, and its hard to know until after the fact what will get you in trouble but because if it costs more to surveil us all then mass surveillance is a dead letter.

And I think that especially for those of us who really do feel we’ve got nothing to hide its really incumbent on us to take steps because, y’know, through no fault of their own we have brothers and sisters and cousins and friends and people out there who are perfectly innocent, who have good reasons to want to hide the fact they’re HIV positive or that they married in a way that would displease their parents because of sectarian prejudice, or because they’re gay and in the closet, or because they have a disability they don’t want an employer to know about.

And if you through the great good fortune of randomness are born with the privilege of having nothing to hide, you have a duty on their behalf to help change the privacy landscape so that they don’t have to fear disclosure, that they don’t deserve any more than you do.

Powerful words. We hope to have more from the Don’t Spy On Us conference later.