Nintendo has had a difficult time as of late – with the WiiU tanking, massive losses and social media storms. Something needs to be done, and I think I know what it should be.

Though Nintendo isn’t attending E3 this year, it is planning an online “Nintendo Direct” announcement scheduled around the start of the conference to showcase its plans for the next year. Whilst we’re expecting some new games titles, Nintendo really needs to show new thinking, to give investors confidence and keep gaming public opinion happy. 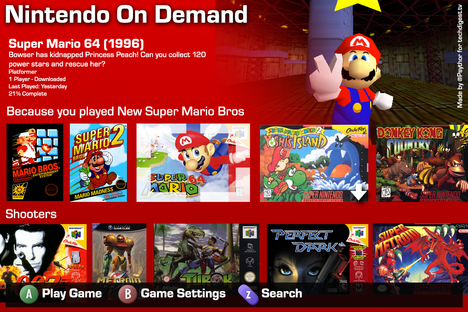 Nintendo’s biggest asset is its characters and its history. No rival company can match Nintendo in terms of its back catalogue of games. So why not make use of this? So far the company has released older titles on the Wii and WiiU’s Virtual Console – but at a slow pace, and charging over the odds for each title.

Imagine if Nintendo opened up its entire back catalogue (or as much as it could, rights-dependent) for unlimited use if users pay a monthly subscription, a la Netflix. You’d pay £10/month for that, right? If you could dip in and play some Mario 64, or Battletoads, or that old title only you remember whenever you like – wouldn’t that be awesome?

Building a service would be pretty straightforward – Nintendo wouldn’t need to release a new console, and could simply update the WiiU and Wii. Heck – a bit of Googling shows just how easy it is to emulate old Nintendo games (especially SNES era and before) on pretty much anything, so why not open it up to multiple platforms? A SNES game is typically only a few megabytes big. Even the largest N64 game was only 64mb. Why not have an Android and iPhone app for playing games? It might even boost WiiU sales as gamers try the phone apps, and realise they want a proper gaming machine to play Castlevania on.

All Nintendo would need to do then is add a few extra useful features – like cloud saves, syncing saves across devices and controller configuration, and suddenly it has an amazing proposition. In a stroke, pirates would stop playing illegally (like how Spotify and Netflix have dented music and video piracy) because this would be so much more convenient.

Overnight, Nintendo would change the games industry again and have a new path to profitability – how many of you would pay a monthly subscription for this? And how does that compare the amount of cash that you (on average) give to Nintendo every month now?

And as for E3… sure, Microsoft and Sony might have some nice games to show off, but surely all everyone would be talking about – in the mainstream press as well as the gaming press – is how they can’t wait to play the game they loved as a kid on their tablet again?