When GPS devices were first released, we were in the pre-iPhone era. Your GPS was a clunky box that you mounted on your car dashboard, and your phone was… well, an actual phone. For calling people. And if you’re lucky, you could text people and play Snake too. 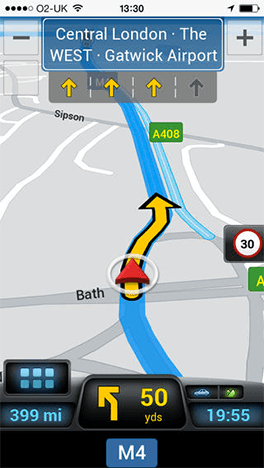 Since then the mobile market has changed beyond all recognition and Google Maps is now an essential app in everyone’s pocket (keep dreaming, Apple Maps). So useful and excellent is Google Maps, in fact, that you could be forgiven for asking: What’s the point in using other GPS software?

This is the question I wanted to answer over easter in northern Germany and The Netherlands. So I downloaded CoPilot’s Europe app to see what the point was.

The first immediate beneficiary of my GPS decision was my phone bill – unlike Google Maps, which relies on your phone being connected to the internet, CoPilot can work offline. This is great news as O2 charge customers £2 for 15mb of data per day when abroad. To put this into perspective – that’s maybe three refreshes of your Facebook news feed, if you’re lucky.

In the Europe app, rather than insist you take maps of the whole continent with you, you can choose which countries to download. Different countries are grouped together – such as the BeNeLux countries, or more bewilderingly, all of the German-speaking countries (Germany, Austria, with Switzerland thrown in for good measure).

So with CoPilot, it was simply a case of being clever enough to download several gigabytes of maps using wifi before setting off. Or in my case, desperately willing the Dutch service station’s shaky wifi connection to download so we could figure out where the hell to go. (Brilliantly, the app is clever enough to realise that people don’t want to download loads over 3G, so if you press to download a massive file, it will throw up a warning asking if you really want to do that.

Driving along, it works as you expect – with 3D mode showing you the route ahead, reading out directional changes and so on. What’s nice on this interface is that there is scope for plenty of customisation – you can switch what data is displayed (for example, how far you have to go, or your estimated time of arrival) and you can have it flag it up what the speed limit is on the road that you are on. It is even possible to change the colours of the roads on the maps so if you’re a purist, you can make the motorways blue and the A-roads green, as God intended. 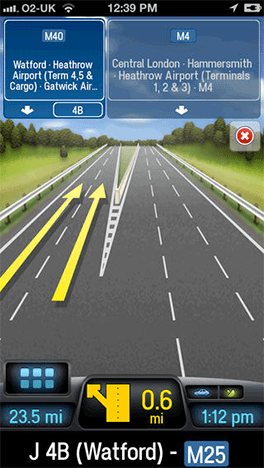 What’s really nice is that the app has figured out how to make those motorway junctions where you have to be in the correct lane intelligible. Rather than have to decypher a small arrow on map, the whole screen flips to a visualisation of the lanes, with it saying above it which lane you should be in, with a bright yellow arrow. This was super useful when negotiating the six-lane roads around Schiphol airport.

So as the main meaty activity of actually navigating you goes – it does the job. But what about all of the extras? There appears to be plenty of Points of Interest programmed in – though annoyingly to find them you have to fiddle about with menus and categories, rather than simply type things in. So great if you’re looking for a petrol station, but if you’re looking for interesting museums it might be better to stick with Google. 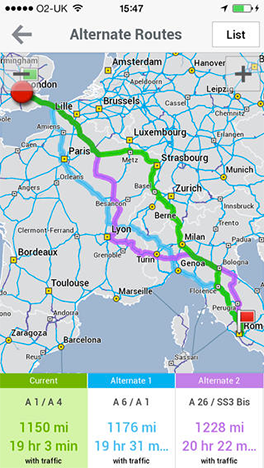 One interesting new feature is the ability for the app to extract the geotags from photos – meaning that if you’re trying to locate a friend, they can simply send you a photo and the app will figure out where they are, using the embedded coordinates. Beware though – there could be potential difficulties in using this, if the service used as the intermediary strips out the tags. For example – if your friend sends the photo via WhatsApp, it’ll work great – but if they use Twitter, it won’t, as Twitter removes coordinates for privacy reasons.

Another is the commute mode. Unfortunately I didn’t get a chance to test this on the trip (I was on holiday, not heading into work!), but it is pretty darn clever. Essentially, the app will pick up if you’re doing the same route day in, day out – and after three days of the same journey will ask if you want to save it as your commute. This means that next time you go to work, it won’t show you how to get there (that’d be silly), but it’ll check the traffic along the way and suggest alternatives if the roads are busy. It’s pretty smart, and will work for other regular journeys too, and will even spot changes if you change job.

There’s also a great feature if you’re in an older car that lacks a USB port. You can enable low-power mode, so that GPS won’t remain active all of the time – and only switch on when needed. This means your phone battery won’t drain before you reach your destination – something that is a very real possibility with modern smartphones.

There is some downside to the app too though. Crucially, I was running the app on my now aging iPhone 4S and it clearly struggled with it. It was at times very sluggish – lagging behind where we actually were on the road, and in responsiveness to the screen being pressed. Worst of all, it appeared to be the big cities it struggled with most – the exact time you want your GPS navigation to work properly. Similarly – and this could have just been a result of the way of I was holding the phone – on a handful of occasions it seemed to lose track of where the car was, judging it to be on a nearby road. This meant a confusing few seconds whilst it issued seemingly bizarre instructions (“do a U-turn” on a motorway) whilst it figured things out.

The other negative is one of familiarity. It simply isn’t Google. The maps look different and have different visual cues – and seems less detailed in many respects (though this is to be expected when this only has your phone to draw on, whereas Google has the cloud). Google are even building in “3D” navigation now, just like proper satnav software – so once the EU have abolished roaming charges next year, you could be forgiven for wondering why it is worth splashing out?

Still – it is nice to have an alternative and until then, it certainly performed very admirably indeed.