Sonos have announced plans to eliminate the last remaining wires from their home speaker system – replacing the wireless bridge… which should hopefully cut down on costs too. 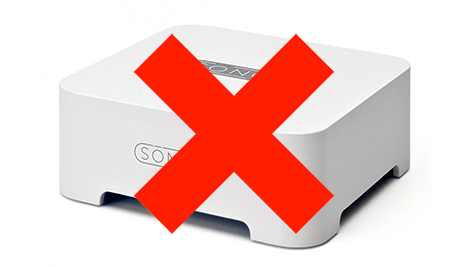 The company have long been at the forefront of premium speaker systems. Unlike competing products, rather than tether speakers to specific devices, Sonos’ devices, such as the Play 1 speaker can all work independently – meaning you can switch on Spotify or the radio via the app, and then shut down and rock out.

The idea the company promotes is having a speaker system that covers your entire house – so you can choose which rooms play which music, and even play different music in each room – and so on. To buy all of the gear for this though could cost many hundreds of pounds.

The latest update though is currently planned for a wide beta test, and would see a software update that would mean Sonos components would connect directly to your wireless router, rather than go through the Sonos Bridge – a previously necessary small box that connects via ethernet to your router and slaps an annoying extra £39 on the cost of a Sonos system.

With the new update though, it will be possible to setup Sonos components to speak to your wireless router using an app on your phone to configure it. (If we had to guess, it will presumably work like setting up a Chromecast, where the device will generate its own hotspot, you connect to that to tell it your wifi password, and then it will connect to your home network).

This follows hot on the heels of further updates to the Sonos apps – which have most recently added streaming support for Google Play Music.

The company will be launching a beta program in the next few weeks – and in the meantime recommend that existing Sonos users stick to using their Bridge for the time being.