Good on Jimmy Wales, the founder of Wikipedia. He has finally responded to a petition setup by practitioners of “alternative medicine” and “holistic healing”, demanding that the encyclopedia waive the desire for things like “facts” and “evidence” in order to placate them. 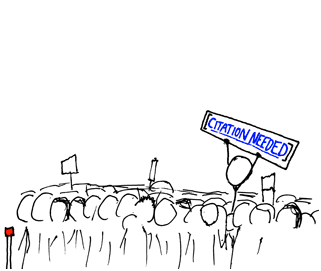 (Pic from xkcd, of course.)

The petition, as spotted by PC Pro, demanded that “Jimmy Wales, Founder of Wikipedia: Create and enforce new policies that allow for true scientific discourse about holistic approaches to healing”. The petitioners went on to explain:

“Wikipedia is widely used and trusted. Unfortunately, much of the information related to holistic approaches to healing is biased, misleading, out-of-date, or just plain wrong. For five years, repeated efforts to correct this misinformation have been blocked and the Wikipedia organization has not addressed these issues. As a result, people who are interested in the benefits of Energy Medicine, Energy Psychology, and specific approaches such as the Emotional Freedom Techniques, Thought Field Therapy and the Tapas Acupressure Technique, turn to your pages, trust what they read, and do not pursue getting help from these approaches which research has, in fact, proven to be of great benefit to many.”

Unfortunately – reality has different ideas. Though there have been endless studies into this sort of thing by actual scientists, none of these “treatments” have ever been shown to be more effective than a placebo – even if all of the dreamcatchers in the room are calibrated correctly. (I recommend the excellent Trick or Treatment if you’re interested). Which is perhaps why Jimmy Wales sounded a little exasperated in his response:

No, you have to be kidding me. Every single person who signed this petition needs to go back to check their premises and think harder about what it means to be honest, factual, truthful. Wikipedia’s policies around this kind of thing are exactly spot-on and correct. If you can get your work published in respectable scientific journals – that is to say, if you can produce evidence through replicable scientific experiments, then Wikipedia will cover it appropriately. What we won’t do is pretend that the work of lunatic charlatans is the equivalent of “true scientific discourse”. It isn’t.

So that’s that then. And crucially, Wikipedia’s credibility as a source that is more reliable than Britannica remains.

Hopefully this failure will also stop the unicorn lobby from pursuing attempts to get the pointy horse inducted into Wikipedia’s taxonomy pages.