The BBC have this morning announced a new version of the iPlayer will be launching across all of their platforms. The upgrade brings a few new features – and crucially is aimed at making things more user friendly.

The big visual change looks set to be in the direction of an iOS7-style “flat” design – which has become increasingly popular (Samsung have also been jumping on that bandwagon with the Galaxy S5). This has been coupled with a great reliance of visuals – with lots more images and apparently a more ‘responsive’ design, as they say in techie circles. This means that the iPlayer should work across a wider range of devices with different sized screens and different methods of input.

The big benefit of this for users is thought to be that links shared to iPlayer programmes should work across devices – so if you click a mobile iPlayer link on your computer, you want just have a tiny box on the screen to watch. 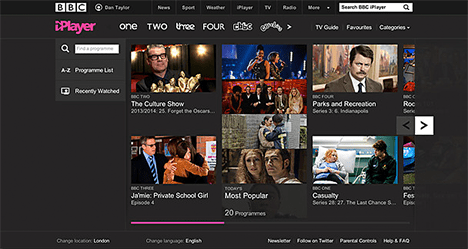 There are some other nice user interface enhancements too: you can now favourite programmes from the player whilst watching, and the searchbox will autocomplete. If you stop watching something half way through, it is easy to resume viewing as the iPlayer will have a “recently watched” section.

Each TV channel’s page is also getting a redesign which again is more image heavy. We’re assuming in the screenshot below that the design shown is unique to Cbeebies… or BBC Parliament’s Select Committee coverage is about to get a whole lot weirder.

If the Beeb do opt to give each channel its own colour scheme (etc) in these sections then it’ll be an interesting departure from the black and pink we’re used to. Perhaps readying distinct identities for when BBC Three goes iPlayer-only next year, so it doesn’t just become a nothing? 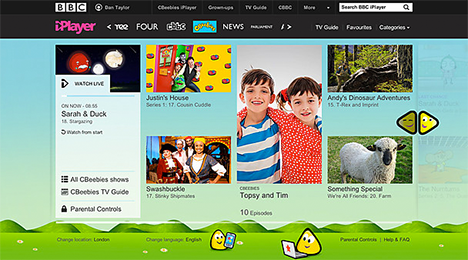 Categories are also getting a makeover – not just visually but taxonomically. The “factual” category is being split up into a number of other strands like “food” and “history” – apparently because it reflects how viewers actually describe programmes. Given his relentless ubiquity on every BBC news programme though, we’re pretty surprised to see that UKIP leader Nigel Farage hasn’t been given his own category.

What is nice though that apparently signed and audio described programmes are getting their own category – which should make it easy for viewers who need them to find shows that support them. 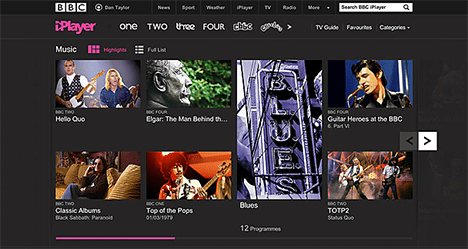 Perhaps the biggest potential change is the inclusion of programme “collections” into the iPlayer proper. These have been going for some time on BBC Four – in which they’d dig up thematically related old programmes from the archive to complement the new stuff on the telly. Is the BBC planning ahead for when they can finally make huge swathes of archive programming available? Will we eventually see the BBC Archive folded into the iPlayer too?