You might think that ‘annualising’ and having a new version of a franchise come out every single year is a bit much – but EA have long been the masters of this discipline. And now they’ve just announced yet another addition to the series: FIFA World Cup 2014. 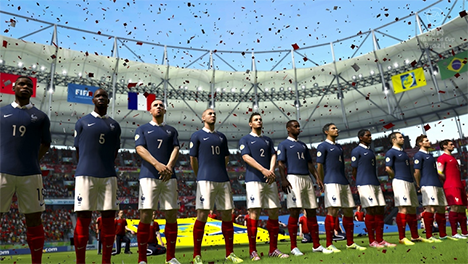 Astonishingly, this looks like it could be the 12th football game they’ve released in merely the last ten years – with this year seeing both FIFA 14 and World Cup 2014, and 2010 seeing similar. That’s on average more than one near identical title a year.

The new game is set to hit on April 15th for both Xbox 360 and PS3 and EA are promising “multiple improvements and innovations” over FIFA 14, which was released only last September – and terrifyingly, one of the big achievements is “100 new animations”. Hold the front page!

Here’s a full run-down of the new features, as described by EA:

This talking of dribbling and ball physics is all well and good (hey, no sniggering at the back), but apparently the game will most importantly feature 203 national football teams that took part in qualifying for the cup and has suitably “patriotic presentation” complete with flags for added World Cup realism.

So that’s FIFA World Cup 2014. Sure, it might sound like it’d work better as downloadable content for FIFA 14… and maybe we should worry about a game that is obviously going to have been both rushed for a fixed deadline (the actual real life World Cup)… and maybe we should ask whether people really should be expected to pay forty quid for a quick re-skin… but… but… Malibu Stacy has a new hat!