New footage of a forthcoming game set in the Lord of the Rings universe looks spookily familiar – at least according to one developer. Former Ubisoft coder Charles Randall claims that some of the animations and code used in Shadow of Mordor are ripped off from the second Assassin’s Creed game. 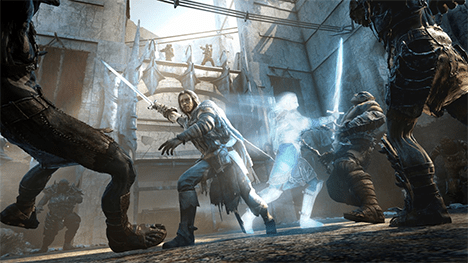 A nine minute gameplay sample was released yesterday showing off what we can expect from the game when it is released later this year. From the outside, it appears to be something of a mash-up of the Batman Arkham games and Assassin’s Creed – with combat that frankly looks awesome.

The plot (thankfully) doesn’t follow the adventures of the Hobbits – and fingers crossed it won’t spend an hour with a mission in which dwarves tediously sing in Bilbo’s house before anything interesting happens too. Instead, the game takes place between the chronology of the Hobbit and the Lord of the Rings, and features a new character called Talion, seeking revenge on Sauron for the murder of his family. The twist is that Talion was also murdered – but was brought back to life with Wraith type powers… which has given him some cool new supernatural abilities.

As demonstrated in the video, this includes the ability to possess non-player-characters and send them off on missions, and instantly leap around the map. What’s also cool is seeing that the major characters will remember damage you’ve previously caused them – so if you smash their face in during one encounter, they’ll remember that for next time round.

Gameplay-wise, the game is an open world adventure that, if Charles Randall is to be believed, isn’t just inspired by, but actively rips off code from Assassin’s Creed II. And watching the above video, you can see where he’s coming from. At the very start, when Talion climbs the structure – it’s pure ACII. Having spent hundreds of hours playing the AC series myself, I can totally see where he’s coming from. The combat too – from the diving from above to the swordplay also seems familiar.

Of course – it could just be a coincidence. In any case – I can’t help but be distracted by the fact this new game looks awesome. I can’t wait to give it a try.