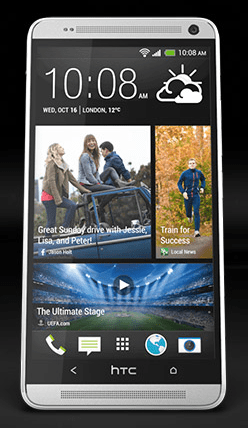 HTC have confirmed what we all thought – the HTC One Max is real and is coming soon. They’ve announced the spec – and when we should know the release date.

Taiwanese HTC have a bit of a mountain to climb to meet Samsung as King of the Android handsets, though it looks like the HTC One Max could be the phone to help get there. The new phone will sport a 1080p 5.9″ screen, and will be powered by a 1.7ghz Qualcomm Snapdragon 600 processor – so should be nice and speedy.

There will be separate 16GB and 32GB versions – though it will also support MicroSD expansion up to 64GB.

Like the HTC One before it, the Max will have “HTC Boomsound” support – that is to say the dual front-facing speakers it is best known for.

Perhaps the biggest differentiator is that it is a HTC – so comes with the HTC Sense suite of apps and software – rather than Samsung’s S-apps. The most interesting these is “HTC Blinkfeed” – which replaces your home screen with a social newsfeed, with HTC claiming it will pick the most relevant Facebook/Twitter/etc stories and displaying them.

Release-wise HTC are yet to confirm a date – though rumour has it that we should be seeing a launch later this month – which some sources are suggesting could be as early as tomorrow. No word on pricing either yet – but given this is a premium device, expect it to be in a similar range to the recent Samsung Galaxy Note 3.