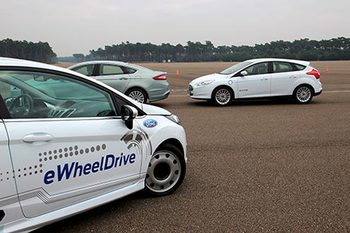 If there’s one thing that my trip with Ford to Belgium taught me it’s that technology is set to play an increasingly important – perhaps vital – role in driving over the coming years.

And we’re not just talking advanced entertainment systems in our cars here, like Ford’s voice activated control (SYNC). Or on demand audio from companies like Spotify which are already found in several of the company’s vehicles. Nor are we talking electric cars like the Ford Focus Electric which I got to test around the company’s test track.

Instead one of the biggest growth areas is in automated systems for improving control and safety and making aspects of driving, especially parking, easier. Like many car manufacturers, Ford is realising that as the roads are getting fuller and people are getting older the need to have these types of systems in place in case of accidents is getting ever greater.

“We’re not saying we’re building cars for old people. That wouldn’t be the best marketing strategy,” jokes head of global consumer trends and futuring for Ford in the US, Sheryl Connelly. “But certainly we consider reduced response time when designing our vehicles.”

According to Connelly the first person to live to 150 years old may have already been born which is perhaps a scary thought if that person is still driving when they are into their second century given my experience of some elderly drivers.

Demonstrated at the Ford Futures event at the Lommel Proving Ground in Belgium were a range of technologies in various stages of development – from concept to production – which have been designed not only to meet the needs of older people but anyone who wants to stay safe on the road.

And while nothing can beat the thrill and adrenalin of racing around in a soon to be released Ford Mustang GT500 (picture left) at speeds of over 150 miles per hour – which was easily the highlight of my Belgian visit – equally interesting, although a little depressing, are some of the technologies which ultimately are likely to take the adrenalin out of driving.

Take the ECG seat. Ford is now working on a car seat with a built in ECG (Electro Cardiogram) monitor that measures the driver’s heart rate over a period of time and transmits any worrying signs to a medical centre. The idea is that the technology could be used to spot any medical condition which may impair the driver’s ability behind the wheel and could even trigger the car’s safety systems in case the driver has a heart attack while driving.

Perhaps most interesting of all is Ford’s obstacle avoidance technology which we tried out at several speeds between 30 and 50 miles per hour. This automatically works by using sensors around the car to tell the onboard computer when it is too close to an oncoming vehicle (an image of the car’s ‘safety zone’ is shown on a big screen next to the driver).

Though early days, the prototype works by automatically steering the car into another lane if the car gets too close to the vehicle in front of it – perhaps because of a medical emergency or just slow reactions from the driver.

Initially it’s a little scary to think that a computer could take over the car’s steering wheel, but I can see it could have a practical use in an emergency situation providing you could trust it enough not to steer you into the path of oncoming vehicles! Ford claims the technology could even be used to automatically alert the emergency services of an accident involving your vehicle using the European wide 112 number. (See YouTube video below to see how the technology works).

One area where Ford, like other manufacturers, is keen to develop technology to make our lives easier – if not necessarily safer – is parking. Already the company has a Parking Assist function to help you reverse into a parking space without having to use the steering wheel.

Soon this will be enhanced with a perpendicular parking facility that will, it claims, make it easier to park in narrow spaces in car parks or a garage by using the car’s sensors to gauge the width of the space. The company is even hoping to take this one step further with ‘remote control’ parking.

Demonstrated to journalists was a system that will, subject to regulatory control, park the car in a garage at the touch of a button on a handset. I’m not sure what would happen though if the system malfunctions and the car backs into oncoming traffic because of interference from the neighbour’s microwave oven or mobile phone. I think somehow it might be some time before that particular level of functionality comes to the market.

Don’t have a cow

Finally, there’s car-to car and car-to-infrastructure communication which works by using wi-fi and cellular technologies to inform drivers of any obstacles in the road. Called V2X, it can be used to deliver warnings to other drivers if, for example, a car has crashed or broken down in the road. The prototype we saw even had what I called the ‘cow button’ which could be used to warn other drivers of livestock in the road!

However arguably more worrying is that the very same technology could also be used by authorities to monitor the location and speed of your vehicle. Already in development is the ITS Corridor connecting Rotterdam to Vienna which will be used to inform drivers of roadworks en route. And while Ford claims this data will be transmitted to cars anonymously how much longer before data is collected from the cars carrying the equipment to automatically issue speed tickets?

It’s all a far cry from the days you could drive your Ford Capri or Mustang up and down the motorway or highway without a care in the world. Pretty soon everything we do and everywhere we go in our vehicle will be tracked, monitored and measured. And while I’m not really sure that’s progress it’s probably going to be make driving safer – as well as a little more boring.

See the car that steers itself in the YouTube video below: