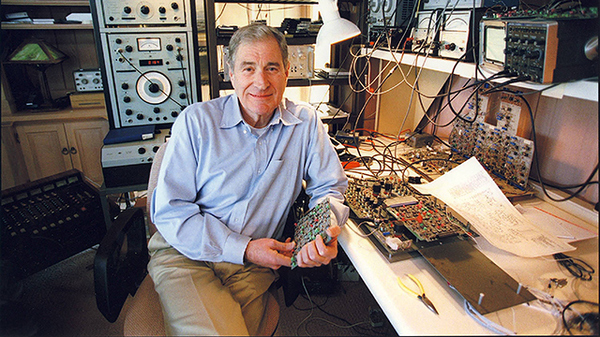 Very sad to hear about the death of Ray Dolby, Founder of Dolby Labs, and sound pioneer. Ray had been suffering from Alzheimer’s disease for several years and was diagnosed with leukaemia this summer.

Born in Portland, Oregon, he grew up in the San Francisco area and began his career at the Ampex Corporation, helping to develop early videotape recording systems while he was still a student. He then went on to complete his PhD at Cambridge University in England and in 1965 founded Dolby Laboratories in London.

The company grew to be an industry leader in audio technology, cutting background hiss in tape recordings and later bringing out “surround sound” which has become the industry standard in both cinemas and home cinemas.Two 1977 blockbuster films, Close Encounters of the Third Kind and Star Wars,used Dolby Stereo technology and made high-end audio an essential part of the films’ appeal.

Mr Dolby moved his company to San Francisco in 1976 and in 1989 was awarded an Oscar for his contributions to cinema. He shared the award with Dolby executive Ioan Allen.He also received a Grammy award in 1995 and Emmy awards in 1989 and 2005.

When Dolby Laboratories went public in 2005, its shares surged 35 percent on the first day of trading. The founder, who held more than 50 patents, received $306 million and his 69.8 percent stake became worth $1.65 billion. As of yesterday his net worth was $2.85 billion, according to the Bloomberg Billionaires Index.

However Ray considered himself first and foremost to be a humble engineer, and would have loved to have been born in an earlier era:

“I’ve often thought that I would have made a great 19th century engineer, because I love machinery. I would have liked to have been in a position to make a better steam engine, or to invent the first internal combustion engine; to work on the first car,” he said.

“All my life, I’ve loved everything that goes; I mean bicycles, motorcycles, cars, jeeps, boats, sail or power, airplanes, helicopters. I love all of these things, and I just regret that I was born in a time when most of those mechanical problems had already been solved and what remained were electronic problems.”

Dr. Dolby’s pioneering work continues to inspire technologies that fuel the imagination of the entertainment and communications industries and his legacy of innovation will be felt for decades to come. He is survived by his wife, Dagmar; sons Tom and David; and four grandchildren.