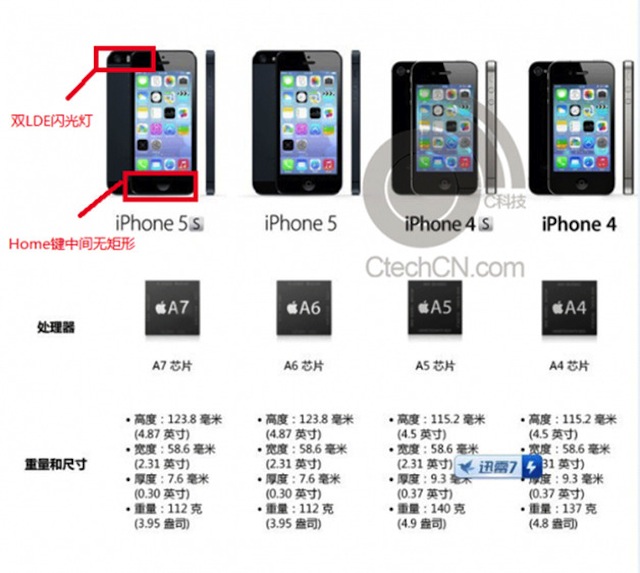 We’re just a day away from the expected launch of Apple’s new iPhone line, with both the premium iPhone 5S and cheaper iPhone 5C set to be revealed, and the leaks keep coming. Ahead of the September 10 launch a comparative marketing release showing the new iPhone 5S alongside previous iPhone models has hit the web.

So does it give anything new away? Not much, and our Mandarin isn’t up to scratch to glean too much more from the leak’s text. But we can see that the Home button’s squared marking has been replaced by a circular one, perhaps indicating the inclusion of the long-rumoured fingerprint scanner?

The camera is also highlighted in the image above, and is expected to land with a dual LED flash and f/2.0 aperture, capable of recording 120fps 1080p video.

Other expected features are 250-hour standby battery life, the inclusion of the latest A7 processor (said to be 25% faster than its predecessor), a 4-inch 326ppi display and 5GHz Wi-Fi.

Apple’s hosting a major press event in Berlin tomorrow night. We’ll be bringing you all the news from the launch as it happens, so keep your eyes fixed on Tech Digest for all the details.