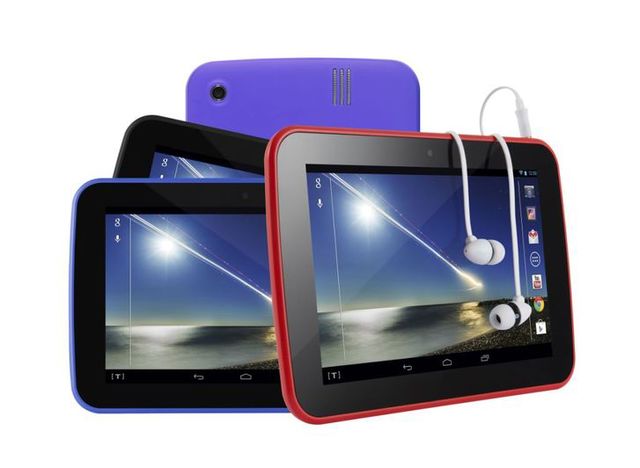 Next time you’re topping up your Clubcard points at Tesco, keep an eye out for the company’s freshly revealed own-branded tablet, the Tesco Hudl. A 7-inch Android slate, it’s priced at £119, putting it in direct competition with the Google Nexus 7 mark-2 and Amazon’s Kindle Fire range.

It’s a crowded market, but Tesco’s Hudl (on paper at least) looks as though it can hold its own. Running Android 4.2.2 Jelly Bean, the thick-bezelled tablet packs in a 1.5GHz quad-core processor, with a 1440 x 900 resolution screen that should keep surfing the web and playing back videos for 9 hours before you’ll need to start reaching for the charger.

16GB of storage space is the only size offered, though it can be supplemented by up to 32GB with microSD cards, and there’s also Bluetooth 4.0 and GPS onboard. If you’re looking to do some on-the-go browsing though, you’re out of luck – this is a Wi-Fi only device, with no 3G or 4G connectivity.

Tesco will be accepting Clubcard points as part of the purchase, allowing savvy spenders to grab the tablet for as little as £60.

So what’s in it for Tesco? Blinkbox is part of the Tesco group, so it’s an opportunity for the retailer to push the movie rental service increasingly to their customers. As a MVNO (mobile virtual network operator) using O2 infrastructure, they’ve missed a trick by not offering a 3G version however.

Hitting the supermarket chain’s stores on 30 September, we’ll be interested to see how well the Hudl holds up against the competition.