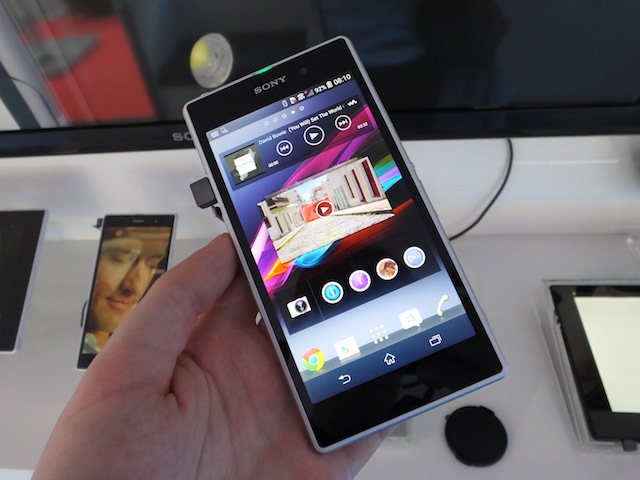 Sony’s mobile departments have been making great strides of late, with the Xperia Z (revealed back at CES 2013) the impressive culmination of years of hard work in the Android market. Fast forward to this week’s IFA 2013 conference in Berlin and its successor has already been announced, the Xperia Z1. We went hands-on with the Xperia Z1 for our first-impressions review and, even with a relatively short development time between it and its predecessor, it’s looking like an incredibly worthy handset indeed.

Though at a glance similar looking to the Xperia Z, the Xperia Z1 is rammed full of improvements both internally and and in its external design. Measuring 144mm x 74mm x 85mm, and weighing just 170g, it sits more comfortably in the hand than its predecessor thanks to a chassis that’s had its edges softened just a tad. There’s still a glass backplate (with the phone available in either black or white), with a surrounding frame made of a single piece of anodised metal that doubles up as the phone’s antenna. Plastics are used sparingly, only visible as a thin bezel around the edge of the screen. 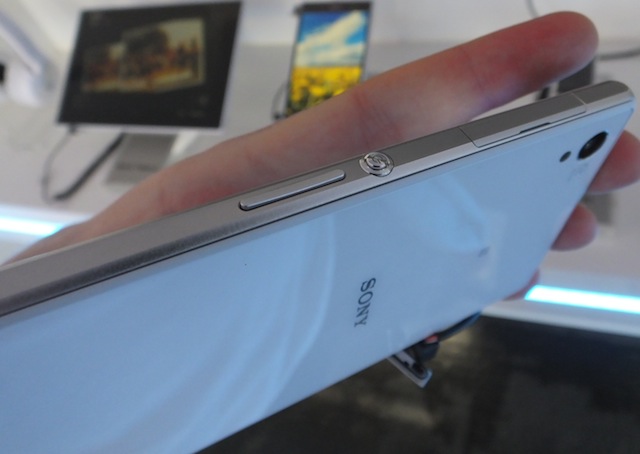 And that screen is a corker. A 5-inch, 1080p display, it burrows tech from Sony’s HDTV lines to offer as striking an image as possible. Alongside the X Reality engine that was also present in the Xperia Z, the Z1 also uses Sony’s Triluminos display tech from the Bravia range, giving colour a punchy look but without scrimping on the subtleties of life-like skin tones. Even under the harsh lighting of the IFA conference show floor the screen looked a treat, with brightness levels that bode well for viewing when out on a sunny day.

Under the hood their are ample improvements too, with the Z1 sporting the speedy 2.2GHz quad-core Qualcomm Snapdragon 800 processor and 2GB RAM. Running Android 4.2.2 (though an upgrade to 4.3 “KitKat” will be delivered as soon as possible), the handset zipped through demanding applications, including a novelty AR app that had a dinosaur running around the IFA show floor (and harking back to the original demo disc that came with the first PlayStation – a reference Tech Digest readers of a certain age will surely appreciate!). 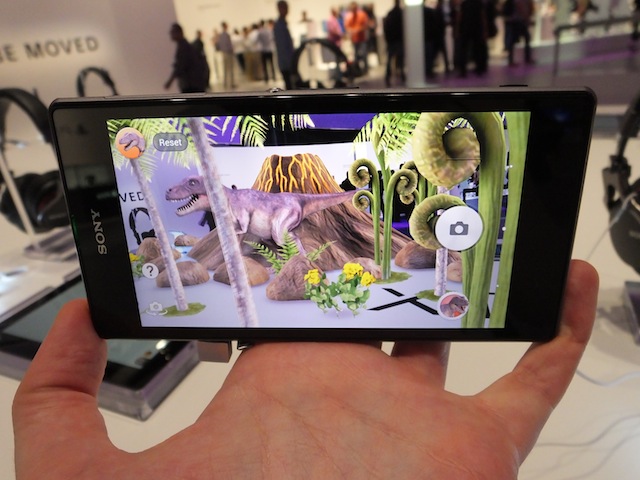 16GB of storage is also onboard, expandable via microSD cards, will a capacious 3000mAh battery will store enough juice to see even a heavy day’s worth of use through without needing to dive for a charger. Sony also offer a magnetic charging option on the Z1, allowing you to pop it into a docking station to feed it power. 4G, NFC, GPS, Bluetooth and Wi-Fi are all of course also supported.

Perhaps most impressive of all however is the new camera system onboard. Using an Exmor RS 1/2.3-inch 20.7-megapixel sensor, Bionz processor and packing in a G lens, it’s borrowing tech from Sony’s compact camera line, and leaving merely an optical zoom off the spec sheet. As such, our time with the camera delivered detailed shots and a speedy response time from the camera application itself. We’ll reserve full judgement until we can blow the images up onto a big screen, but the early signs here are promising. 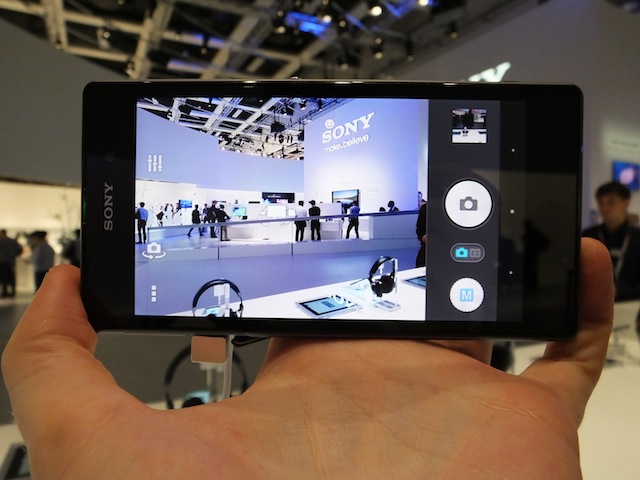 The camera UI also has a number of interesting new features included. As well as the aforementioned AR tricks, there’s a Time Shift Burst option that takes 61 shots in a go (30 before the shutter is pressed, 30 after, and one as the shutter is hit), and a Social Live option that will enable you to livestream video to Facebook in 10 minute chunks, letting viewers add comments along the way. 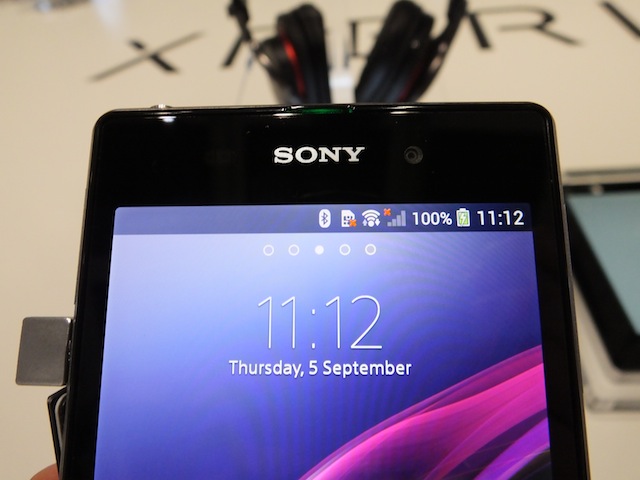 Refinements have been made to the handset’s waterproofing features too. Though there are still annoying flaps protecting the microUSB and SIM tray slots from a good dunking, the headphone socket is now thankfully left exposed, and yet remains safe when submerged in water. allowing you to easily plug in your cans without having to fiddle with a cover.

Very promising then. Sony executives have pinned the handset down for a release as soon as September 16th, so if you’re on the market for a new Android phone this should be shooting to the top of your wishlist. We’ll have more on the Xperia Z1 shortly, so stay tuned.