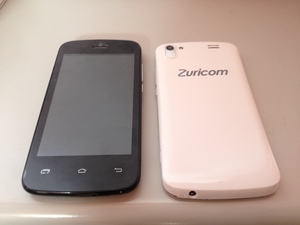 Called the Z-Phone, the key attraction of the new model is the Dual SIM card capabilities which means users can have two different mobile numbers, even two different networks, in one smartphone.

For more efficient energy usage, Zuricom claims, the Z-Phone includes Graphic RAM (GRAM) technology.GRAM reduces the display’s energy use by up to 26 percent on a still frame and increases overall usage time on the device by approximately 15 percent.

Picture resolution on offer is between 4MP and 8MP and there’s also an FM Radio with built in antenna on board.

All Z-Phone owners also automatically become members of the Z-List Club which offers  deals to Z-phone users in over 140 countries, from discounted restaurants and hotels, to access to VIP concerts, awards ceremonies and business events.

Says Jordan Kensington, President and CEO of the Zuricom: “We are increasingly becoming the choice brand for niche consumers who want variety and are seeking for something unusual and different.”

Following the global launch event in London, attended by Business Secretary of State, Vince Cable, the Z-Phone will be rolled out to over 100 wireless carriers in the next four month’s starting in the UK followed by Africa, North America, Europe and other key markets.

Costing £250, the Z-Phone is currently available exclusively from Zuricom’s website.