A DIY digital Disneyland is the order of the day with Disney Infinity, the Mouse House’s new Skylanders rival that looks to combine our childhood love of toys, with our obsession with collectibles and video games. A whole new world for gamers? Read our full review to find out!

Had Mickey Mouse’s Sorcerer’s Apprentice turn in Disney classic Fantasia seen him magically experimenting on a Skylanders playset and a PlayStation running LittleBigPlanet rather than a couple of old mops, chances are the resulting madness would have spawned something not unlike Disney Infinity.

A massively ambitious title, it aims to marry the addictive collectible nature of Skylanders with the creative, world-building elements of the likes of LBP and Minecraft. It’s a goal it pretty much succeeds in pulling off, combining the fun of video games with the tactile joy that only toys can offer. 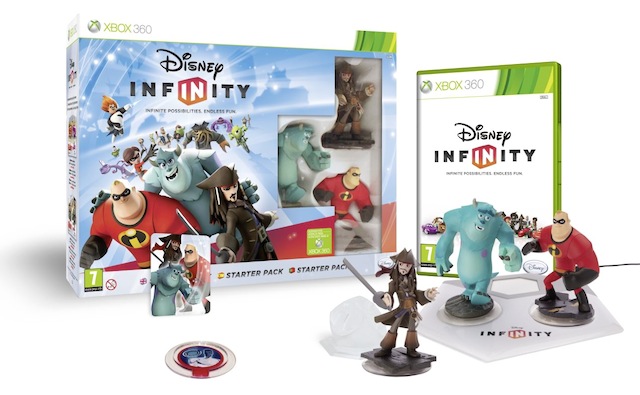 Like the toy chests that have inspired it, Disney Infinity is a game that’s made of many components, both physical and digital. The Starter Pack reviewed here comes with the video game itself, as well as a trio of toys that, when placed on the included stand, are brought to life in the game. It’s a concept proven to be a lucrative one by Activision’s Skylanders series: the starter pack includes a figure of Monsters Inc’s Sulley, Pirates of the Caribbean’s Captain Jack Sparrow, and Mr Incredible from The Incredibles, making those three characters instantly playable in the game. To access other Disney characters and their skills, you’ll have to purchase further sold-separately figurines at £12 a pop, as well as cheaper Power Discs that further supplement gameplay with wacky items. Only by eventually grabbing all characters and power discs will gamers have access to all that Disney Infinity has to offer, making for one of the more expensive hobbies this side of a Panini sticker album.

That’s not to say there isn’t already a host of content available from the Starter Pack alone. Each included character has their own themed “Play Set” to explore, each offering a slightly different sort of gaming challenge. All roughly able to be categorised as third-person adventures, Mr Incredible enters into a kid-friendly GTA-like sandbox city, Jack Sparrow wields a cutlass through an action-orientated platformer, while Sulley explores the Monsters University campus, engaging in some light stealth gameplay. Lighthearted, and lasting roughly 4 or 5 hours each, they’re enjoyable enough, though I found them mostly present as a means to an end – finding components for the game’s Toy Box mode. 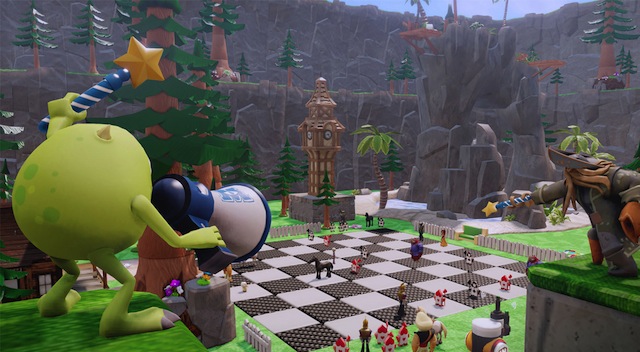 The Toy Box mode is Infinity’s masterstroke, easily the most compelling reason to get involved with the game, and likely what will inspire kids to want to snap up all the associated toys and Power Discs. Populated with items you collect in the Play Sets, the Toy Box mode lets you create your own worlds and games to explore and play in. Whereas the Play Sets are rigid in their goals and only allow for characters associated with each world to be present, the Toy Box is a free for all, allowing you combine settings from one Disney world with characters from another to create all new experiences.

An intuitive building tool lets you easily pull together all these pieces to create a mad variety of game modes. If you want to create a racing track that’s being bombarded by pirate ship cannons, or a maze filled with killer robots, all you need to make it a reality is here. Larger pieces like Cinderella’s castle can be plonked down with ease, while even more complex switch-and-trap set ups can be set up with just a few button presses. There are moments when things get a little finicky (the lack of an undo button is annoying, while it’s a shame that terrain pieces don’t always snap into place and align), but it’s a toolset that allows you to have created a Disney-themed digital playground in minutes, and that can’t be praised highly enough. It’s marvellously fun, a great way to inspire kids’ creative impulses, and only limited by their imaginations. 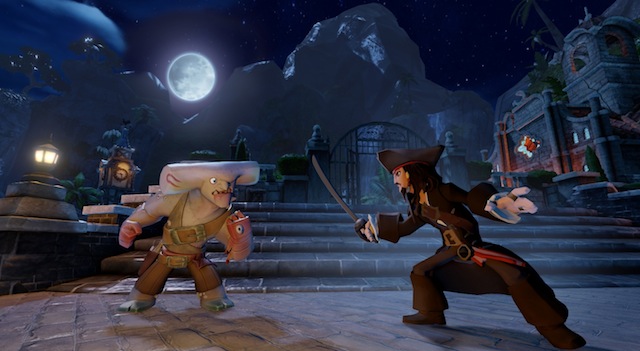 Well, sort of. As mentioned earlier, some components of the Toy Box have to be collected through play in the Play Sets, and others through real-world purchases. Both prove problematic. There are moments when the game meanly hides items behind slot-machine style reward mechanics, keeping some of the more desirable Toy Box items constantly out of reach. Then there are moments when you’ll hit a locked off area in a Play Set, only accessible by a sold-separately character, teasing further Toy Box goodies if you would only just buy a few more toys. Though generous in what is initially on offer, you’ll constantly be reminded of the fact that you’ve essentially bought access to only part of what’s on offer overall.

Secondly, there’s no support for local multiplayer out-of-the-box in the Play Sets with the Starter Pack, as each requires two characters from the same universe to enjoy. While Captain Jack can explore a Toy Box creation with Sulley, he can’t explore the Monsters University campus with him – a cynical move to encourage an additional toy purchase for anyone looking to enjoy structured missions with a friend. 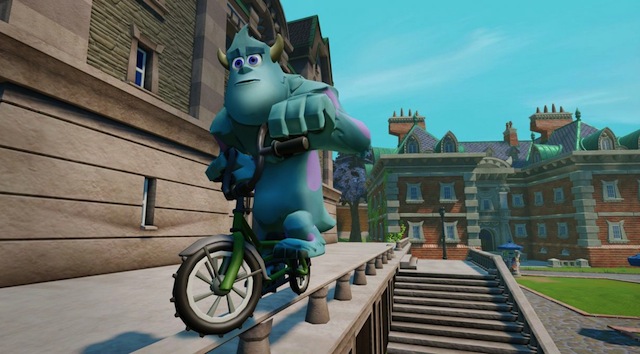 As for the toys themselves, I was pleasantly surprised with their quality. Though not fully articulated (each being attached to a game-connecting base stand) they’re chunky, sturdy figures, on average a bit larger than the Skylanders models. Even without the video game elements we could see collectors being drawn to them, and the unifying, highly-stylised visual design seen in the game itself is mirrored attractively in the physical toys. They’ll make a welcome addition to any real-world toy boxes or display shelves alike.

As a weary uncle of two young nephews, I’m still terrified at what their potential Disney Infinity addiction could mean for my bank account. At heart I’m a completist myself, and I can easily foresee frustrations when not every element of the game is instantly accessible. And yet, after playing with Disney Infinity, and smiling so often at the opportunities it presents, I find the cynic in me melting away. The Starter Pack, though not perfect, is a generous first offering of content. Though it tempts with further purchases, they’re not obligatory in order to have a lot of fun. Like a good real-world toy box, they just tease the desire to expand the horizons of your play time, a desire that (with a little invention and imagination) you may be able to sate with what’s already tucked away inside.