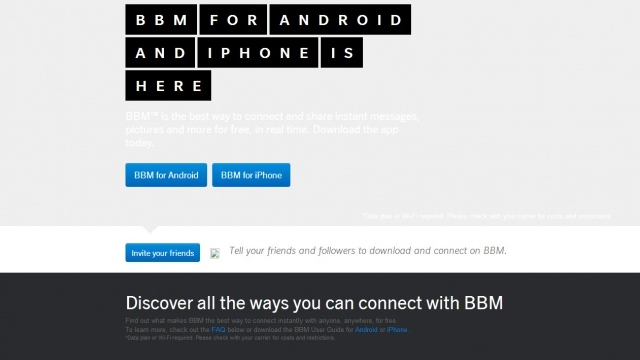 BlackBerry’s much-loved BBM service may be making its way to Android and iPhone handsets sooner than expected, as a placeholder page advertising the cross-platform messaging service breifly hit the web last night.

Spotted by CrackBerry, the clumsy BlackBerry webmasters quickly took down the prematurely published, half-finished page that appeared last night. But not before a few details were gleaned and screen captures were saved, revealing that the app will be available as a free download across both platforms.

Those hoping to get as fully-featured a service at launch as what is offered through BlackBerry’s own BB10 operating system version of BBM will be disappointed however. The page revealed that the BBM Voice, BBM Video and screen-sharing options won’t land until later in the year.

With the BB10 platform struggling to gain traction in the crowded smartphone market, BlackBerry will be increasingly looking towards farming out their services to other platforms. Earlier this month, it was even suggested the company may be considering selling up.