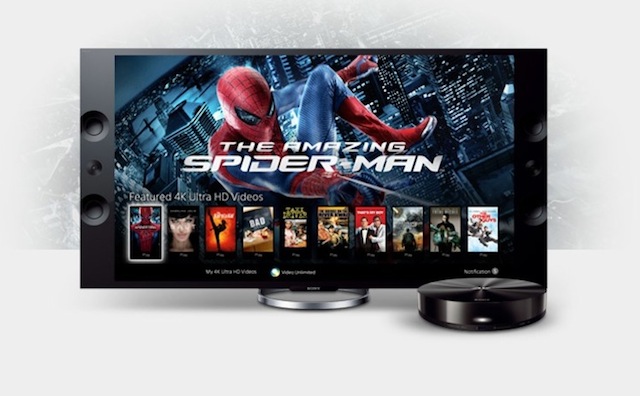 One of the lucky (flushed-with-cash) few who have bought a Sony 4K television, but have no Ultra HD content to view on it? Sony have you covered with their new 4K Ultra HD Media Player.

The 10 pre-loaded movies include The Amazing Spider-Man, The Karate Kid, Bad Teacher, The Other Guys, Battle: Los Angeles, That’s My Boy, Salt, Total Recall 2012, Taxi Driver, and The Bridge on the River Kwai. Housing 2TB of storage, you’ll be able to attach your own hard drive to expand the number of films that can be stored on the the player, and you’ll likely need it; 4K movies are set to be huge files taking up lots of storage space, and will be difficult to effectively stream at most standard current broadband speeds.

Sony have also popped in a number of short demo films which can be used to showcase the supreme clarity of the new TV tech.

Once launched, the Sony Video Unlimited 4K service will offer a catalogue of regularly updated full length films in 4K resolution which you can rent or buy from (most likely populated with just Sony Pictures movies). It’ll cost $29.99 to buy the films, or $7.99 to rent them for 24 hours.

It’s good to see Sony providing for the early adopters in this way, but you have to wonder how quickly this $700 machine will be made obsolete. With streaming technology improving all the time and broadband speeds similarly speeding up, I imagine it won’t be long until the likes of Netflix can deliver 4K content as part of their package. It may take a year or two, but it’s definitely on the horizon.