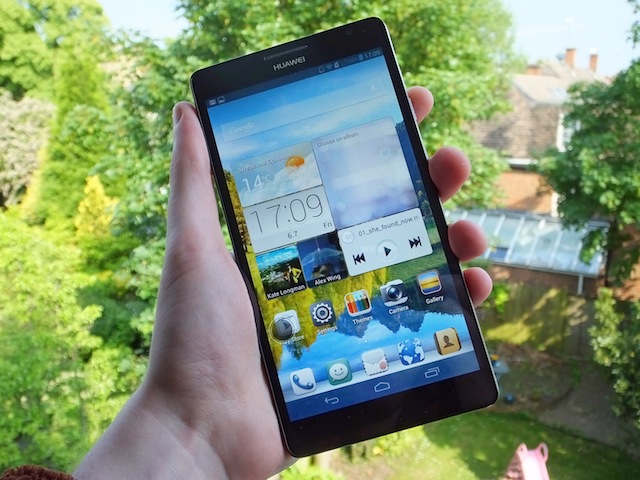 Price as reviewed: From £375 SIM-free

6.1-inches is just too big for a mobile, right? Find out just how far the boundaries of a smartphone can be pushed in our full review of the Huawei Ascend Mate, the latest handset to blur the line between tablet and phone. 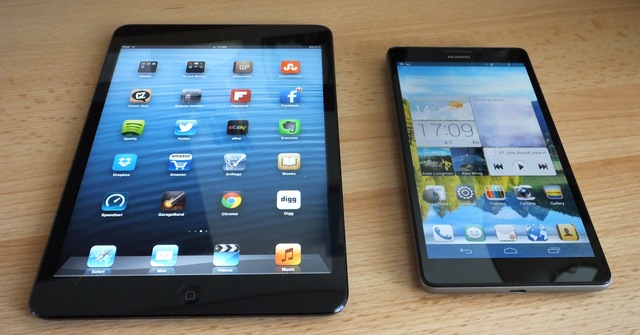 The Huawei Ascend Mate is big. Like, really big. With a 6.1-inch screen, it’s more than a centimetre taller than the Samsung Galaxy Note 2, and 5mm wider to boot. Weighing 198 grams, it’s actually quite light given its size, but is still far heavier than a traditionally sized handset would be. Even the elongated iPhone 5 weighs only 112 grams. The Ascend Mate does stay relatively slim at 9.9mm though. Either way, it’s the sort of device that the cheesy “phablet” term was coined for – it really is a halfway house between the two. But even having played with the device for a few weeks now, we’re torn as to whether or not it can comfortably replace either, let alone both. We’d more likely to consume media like movies on a larger device, and felt pretty weird holding the device up as a phone to our ear. Investment in a Bluetooth headset is going to be a must here.

In terms of design, Huawei keep it simple. Uniformly rectangular on the front with only a thin black bezel either side of the display, when looked at from the front the Ascend Mate looks a little like a stretched iPad Mini. No physical buttons however are present on the front, with Huawei favouring Android’s software touch controls throughout. 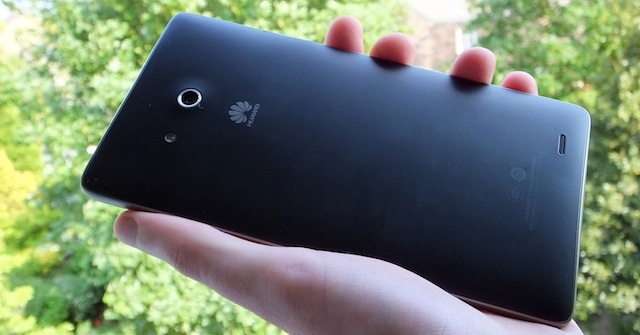 There’s a slight curvature to the dark grey plastic casing around the back (sealing in the non-removable battery), while chrome-look edging runs around the side of the device. The bottom edge houses a microUSB charging and data transfer port, while the top has a microSIM slot and a 3.5mm headphone jack. The left hand side has a microSD card storage slot, while halfway down the right-hand side sits the volume rocker with the power button slightly above that. If this seems an odd place for the buttons to go, it actually proves the most comfortable place to reach them, given the size of the thing.

The key attraction here then has to be that screen, and it is certainly quite lovely. Using a bright IPS LCD display, it has a resolution of 1280 x 720. What it lacks in pixel density (240 ppi compared to the 267 ppi of the nearest comparable handset, the Note 2), it makes up for in readability and brightness – text is large and clear on the handset, making eBook reading and web browsing very comfortable, not to mention watching videos. Watching movies on the device is great, nearly as good an experience as using a 7-inch tablet for the same purpose, and the loudspeaker clean enough to negate the need for headphones the whole time. The screen also supports a “Gloves” mode, letting those in colder climes ramp up the sensitivity of the screen in order to be able to use it without removing mittens. 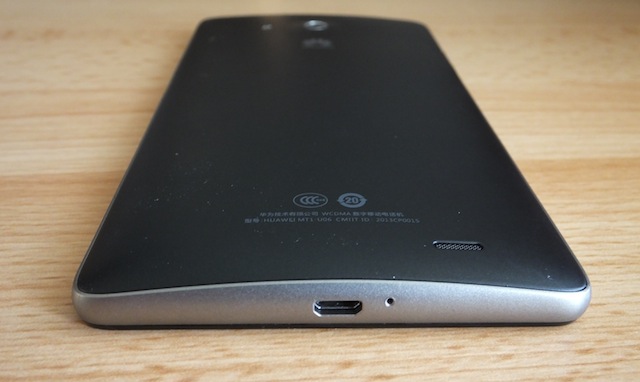 Under the hood, the Ascend Mate features a 1.5GHz quad-core processor, backed by 2GB of RAM. That’s a premium spec, but the handset’s performance just doesn’t match it – even the most basic of tasks, such as inputting text, results in noticeable lag, and 3D gaming performance is well below what you’d expect form a quad-core chipset. What’s causing this disparity is unclear, and though most basic phone tasks aren’t massively affected, it’s noticeably more sluggish when sat next to other quad-core phones. Frustratingly, it’s a widely varying performance too – playback of a 720p video didn’t strain the phone, but messaging did. There’s a capable processor in here somewhere but something is dragging it down. It may well be the bespoke UI, which we’ll detail next. 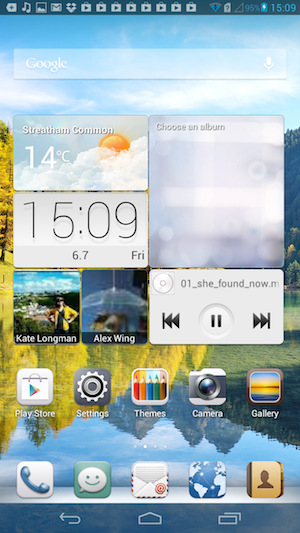 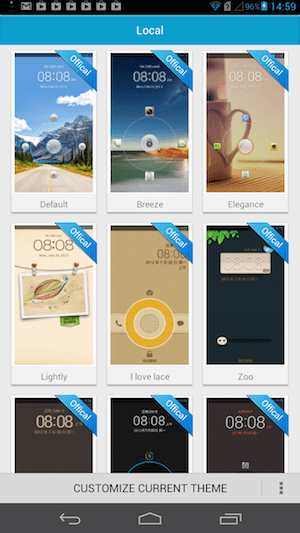 It makes use of a single Huawei-built widget that shows date and time, weather reports, music controls and favourite contacts, and can have dozens of different looks applied to it that tweaks the style of the rest of the phone too. App icons get unique different identifiers between each theme, while lockscreens vary in style wildly, even if offering the same basic functionality, (letting you drag small icons to an unlock button to quickly access the dialler, messaging and camera) Every Ascend owner could have a markedly different looking phone than the next without even diving into what’s on offer from the Google Play Android store. 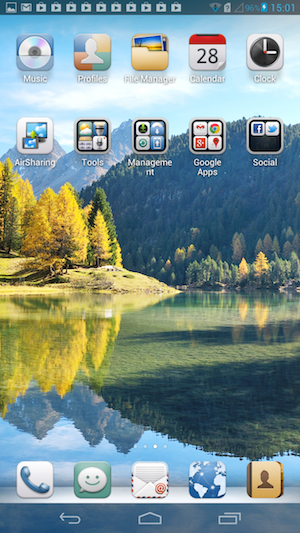 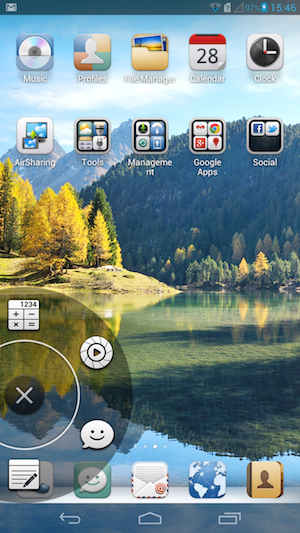 There’s also an intriguing option called the “Suspend Button”, which can be placed at six hotspots around the edge of each screen, sitting over the rest of the UI constantly. Tapping it gives quick access to a note taking application, messaging, the camera and calculator. To be honest, we didn’t find much use for it, but there’s always someone out there who will find this sort of thing invaluable. Either way, it’s an optional feature, so you don’t need to get hung up over it if it’s not for you.

Frustratingly however, it does away with the staple Android app drawer, which initially had me very complexed. Instead, all downloaded apps hit one of the homescreens straight away, rather than optionally being stored in the drawer. You’ll have to rely on folders in order to keep your less-regularly used apps in check, making the experience far more like Apple’s iOS, though not entirely as intuitive, given the expectations one arrives at Android with. 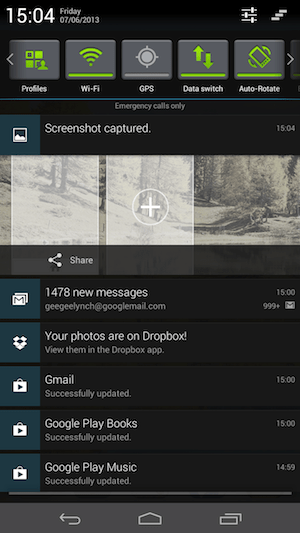 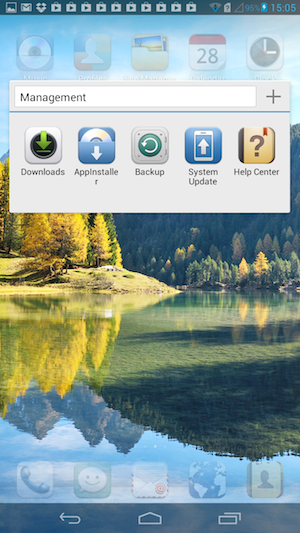 Accessing notifications and settings is handled nicely though. As you’d expect from an Android phone, swiping down from the top reveals updates from apps, messages and emails from contacts. Along the top however is a scrollable row of buttons, letting you tap controls including Wi-Fi and Bluetooth on and off. It’s an efficient system.

Other than that, Huawei keep it simple when it comes to pre-installed apps. As well as access to the Google Play store, the full suite of Google apps come pre-installed (Chrome browser, Maps, Google+, et al), as well as Facebook and Twitter. Kingsoft Office is on hand for document editing – something you may find yourself considering more often given the screen size – while there’s also a file manager, flashlight, DLNA sharing app and backup manager among the handful of other pre-installed applications. While not as good as the Chrome browser overall, Huawei’s own web browser has a feature we still wish was more prevalent in smartphone browsers – text-reflow, letting even words from oversized web-page widths run comfortably without the need to pan. 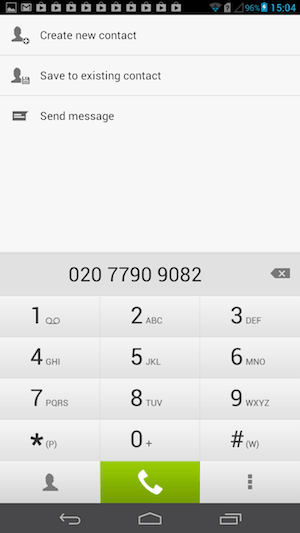 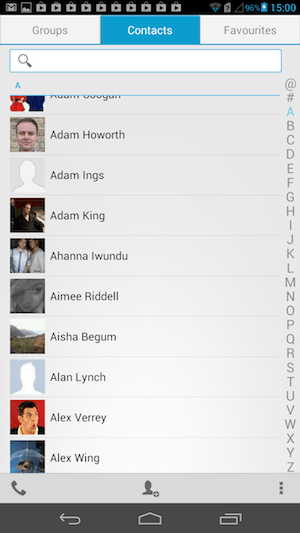 Considering the highly-stylised themes offered up by Huawei on the Ascend Mate, the Contacts book and dialler are starkly minimalist. Each uses a plain white screen with black text on grey-tinted buttons. Within the Contacts app, you’ll get a splash of colour if your pals have a photo associated with them, which the phone will automatically display alongside their name. There’s no Facebook or Twitter integration though, so all contacts will come from your Google Account or SIM card.

The dialler app simply has a list of recent calls above its numbers, sitting empty if you’ve yet to call anyone. It does have T9 predictive dialling though, letting you tap out letters of a contact’s name rather than their number in order to find them. Calls on the whole were clear and cleanly audible on both ends of the line, and we experienced no notable signalling drop out.

The default messaging app and keyboard keep things similarly minimal, with the same white/grey design. Adding multiple contacts to a message is simple thanks to a button that jumps straight to the Contacts app, letting you select multiple recipients at once. 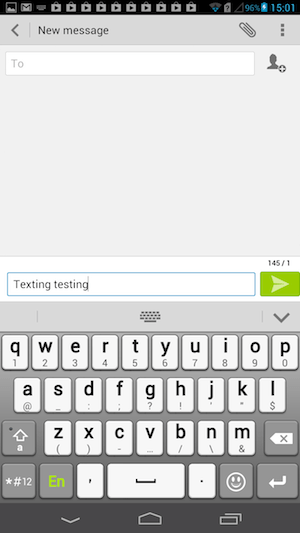 We’re not totally sold on the keyboard though. It’s a good size (and is scalable to your tastes) given all the space it has to play with, and the haptic-feedback is very strong in the handset, giving a very tactile rumble to every key press. However, auto-correction seems a bit off, and it’s not as easy to fix mistakes as some word-tapping solutions offered by rival phones.

As well as Huawei’s basic exchange/webmail email account app, the Gmail app is also pre-installed, which is a fantastic mobile build of the desktop variant. Gmail users will be totally at home labelling and starring emails and scrolling through long chains of messages from the same recipient. There’s also great search functionality built in, meaning you can easily dive into an inbox brimming with thousands of messages and pull out the one you’re after.

The Huawei Ascend has a 2MP camera round the front, perfectly adequate for video calling, and an 8MP sensor for serious still photos and video capture around the back.

Though there’s a few nifty software additions, such as Instagram like features, some mad facial distortion effects and colour filters, as well as a speedy shutter, the captured results are average at best. Photos look their best when viewed on the handset’s screen – popping them onto a PC exposes plenty of artefacts, though colour reproduction is accurate. The interface at least is clean and easily navigable, letting you access a few basic scene selection options with ease. 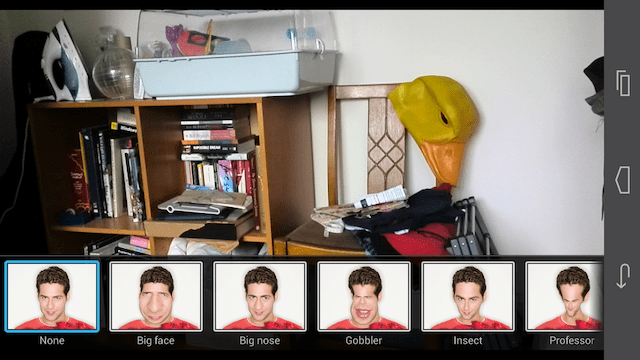 Video capture tops out at an odd 1920 x 1088 resolution, making for an ever-so-slightly taller image than a standard Full HD video. To the naked eye it’s almost imperceptible, but it’ll likely play havoc with a TV’s overscan settings if you’re looking to play back videos recorded here on the bigscreen.

Video capture is reasonably good. Contrast levels are fairly rich, with the image detailed and sharp, aided by a modicum of stabilisation. There’s touch focus too, letting you set the frame’s main subject.

The Ascend Mate’s battery life is really rather wonderful, helped no doubt by being a size large enough to have ample room for a capacious 4050mAh battery pack. With a screen so bright and large paired with a quad-core processor, you’d expect the ascend Mate to eat through its power supply at a good clip, but it manages to eek out considerable spells without needing a top up.

Running video streaming, video playback, web browsing and music playback tests, the battery averaged around 7 hours under a heavy load. Considering only those constantly jacked into The Matrix will sit for seven hours straight on their phones, we expect you could manage two straight days without needing to reach for the charger. It certainly worked out that way for us on occasion during testing.

Huawei’s Ascend Mate is an unremarkable phone with a remarkably good screen. It’s UI is sure to be divisive, a kitchen sink approach that will alienate long-time Android fans despite offering plenty of built-in customisation features. Camera performance is middling, but most frustrating is the processor performance. Everything feels intermittently sluggish, and the reasoning behind it remains unclear, making it difficult to combat effectively. As a multimedia handset it’s commendable, and film fans have a lovely portable screen to watch their favourite shows and movies on here. But as a phone it’s just too big to comfortably use. There’s definitely an audience for a phone this big, but try it out if possible before committing to buy even if you’re enamoured with its admittedly lovely screen