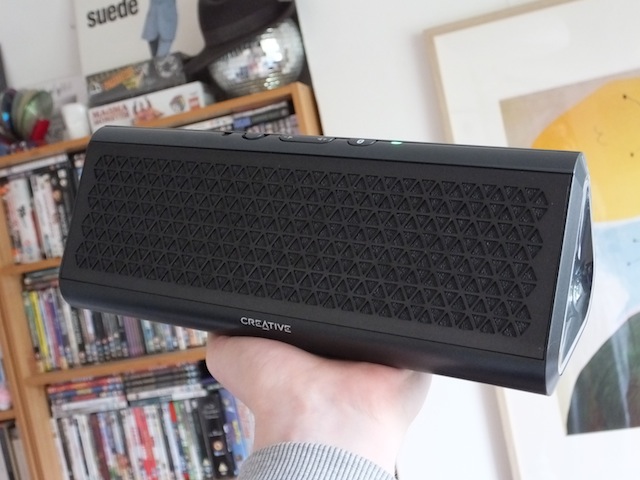 Can NFC functionality and stellar battery life elevate the Creative Airwave HD above the masses of Bluetooth speakers available? Read our full review to find out!

Rather than the opting for the standard boxy shape of most Bluetooth speakers, the Creative Airwave HD instead has a triangular, prism shape. It’s not unlike a Toblerone, with two curvy recesses at either end. On the front is a plastic non-removable grille that continues the triangular aesthetic. While the design looks a little bland on the black version we tested, a red version we’ve also seen is actually very bold and attractive, where the shadowing on the grille results in a more distinct and pleasing pattern. 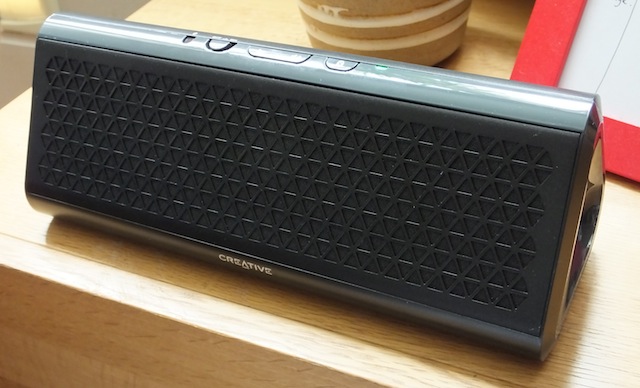 Along the top of the device you’ll find the Airwave HD’s controls, including a power slider, a volume rocker (which has an annoyingly large number of minuscule volume steps, taking an age before jumping to the top decibel levels) and a Bluetooth pairing button. You’ll also find a battery/Bluetooth indicator light here, as well as an opening for an integrated microphone. Around the rear in a recess you’ll find the microUSB charging port (which will work with basically any microUSB charger and can be used for adding juice from the speaker to a mobile device too) and an Aux-in port, next to a cavity for improving bass response.

The Creative Airwave HD measures 3.8 x 10.3 x 3.8 inches and weighs 980g. It’s not the tiniest portable speaker out there then, but its extra heft does allow it room for components to push its volume levels strikingly loud, and for a capacious battery; two things we’d happily accept in a trade off against size.

Pairing is incredibly simple with the Creative Airwave HD thanks to built-in NFC connectivity – simply switch the feature on on your smartphone, place the mobile against the rear of the speaker and the two become music-sharing buddies. It’s great, and far more reliable than sometimes-finicky standard Bluetooth pairing, and we wish it was available in every wireless speaker. If you don’t have an NFC-enabled device, you can pair the speaker in the standard Bluetooth fashion by holding down a button on the top of the Airwave HD and selecting the speaker from the Bluetooth menu on your music player. And, of course, there’s always the option of a wired connection through the Aux-in port on the rear. 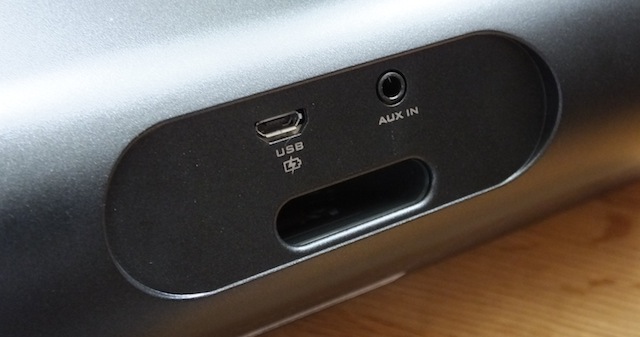 The wireless systems employed here also have a few other neat features. An integrated microphone will allow you to wirelessly take calls with the speaker (so long as you don’t mind your call being broadcast to anyone within earshot), while multipoint Bluetooth connectivity will allow two devices to connect to the speaker wirelessly at once. It’s a useful feature for when playing tune-tennis with a pal – as soon as one user pauses their music and the other’s starts, the speaker knows exactly which device’s sound it should be pumping out. 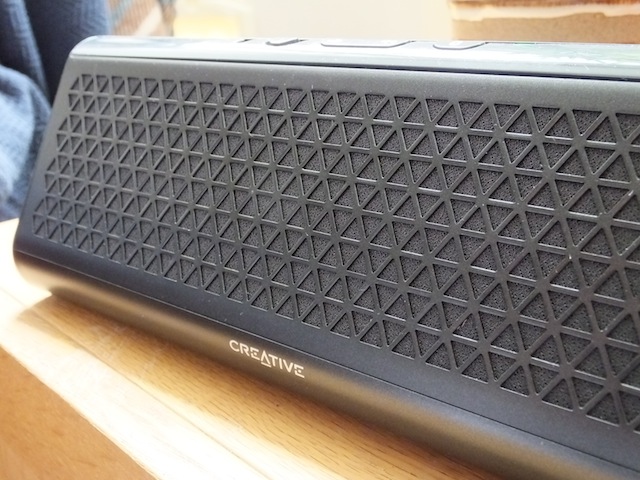 In terms of sound, the Creative Airwave HD is a mixed bag. Though cranking up incredibly loudly thanks to an integrated Creative Super Charged amplifier (loud enough to wind up every other person in the park that we tested it in), it’s not the most elegant sounding system out there. Trying every genre from classic 70s rock through to the glacial electronic sounds of Alex Metric, the Creative Airwave HD’s sound is firmly footed in the mid-range. There’s a bit of kick to the bass end, but no warmth to the tone, and treble is harsh rather than detailed. It’s not a bad sounding speaker by any means, and sits just behind the better portable systems we’ve heard, but it’s overall a bit flat, and not a patch on the best audiophile home hi-fi’s you’ll hear. In terms of its soundstage, its size and triangular shape allows for a wider dispersal of sound than similar speakers, though it’s still lacking the width of a wider stereo speaker set up, meaning pans get lost in the mix. 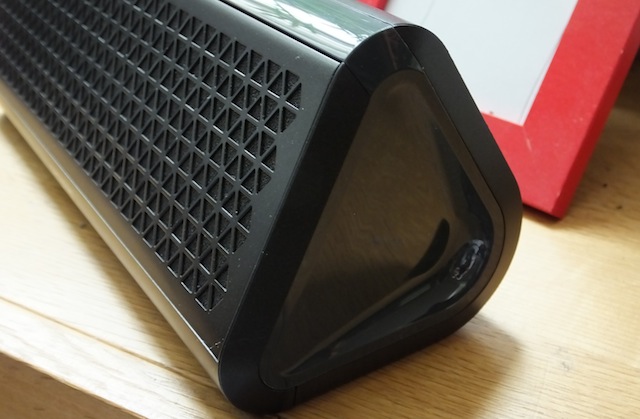 To get overly particular on whether or not the Airwave HD will please audiophiles is sort of missing the point though too – the speaker is intended for outdoor, drunken tunes without hassle, and in one key area its got this totally sewn up: its best feature of all is the incredibly impressive battery life. Though the company state 7 hours of playback on their website, that seems a conservative statistic. Running the speaker constantly, streaming a lengthy Spotify playlist to the Airwave HD, we sailed right past the 8 hour mark with the volume levels fairly loud throughout. We wouldn’t be surprised if you could squeeze 9 or more hours out of the speaker from one charge if you dialled the volume down a little lower. Great stuff.

There’s lots to like about the Creative Airwave HD. It’s got a punchy sound that hits incredibly high volume levels and, in the red version at least, an interesting and eye-catching design that’s portable enough to take with you to a picnic or beach party without too much strain. Though its overall sound lacks detail and elegance, it more than makes up for it with a pain-free NFC pairing system and incredible battery life that will see you dancing away into the wee hours.