The sequel to one of the most revered strategy titles of modern times, Company of Heroes 2 takes on the challenge of depicting World War II’s harrowing Eastern front. But can it’s wealth of new systems deliver an experience both fun and historically accurate? Read our full review to find out!

The Eastern front of the Second World War has never been an easy area to approach in gaming, given the morally dubious tactical decisions Soviet generals employed as they pushed back the Nazi forces. Pulling it off in a sympathetic way in an RTS game is all the more difficult, given that you’re in control of sending the digital cannon fodder to their doom.

Company of Heroes 2’s single player campaign narrowly manages to pull off this delicate balancing act. You’ll live through the memories of one Lev Abramovich Isakovich, a former Soviet officer locked up in a gulag in after questioning his superior’s actions. Through his interrogation by his ex-commander, you’ll experience harrowing events such as the infamous Order 227 as the Soviets begin to bring the fight to their German oppressors. 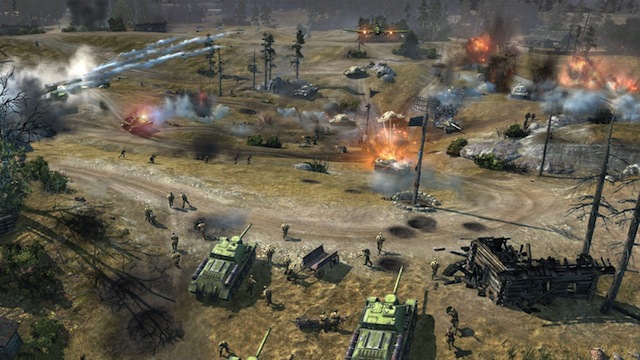 The first game in the series was lauded for its truly strategic focus, something that Company of Heroes 2 for the most part retains. There’s no emphasis on resource collecting, and scant few moments where rushing out an overpowered tank fleet is a sure fire route to success. Instead, the game requires you to carefully manage your troop placement, making use of cover points littered around the maps as well as occupying buildings in order to maintain a defensible line of sight from which to fire upon enemy troops. With a superbly constructed skill set for the many differing units you control, there’s often a broad amount of flexibility to the way each mission can be approached. At it’s best it’s tense and rewarding, forcing you to think on your feet often in the face of seemingly impossible odds.

The original game looked great, and this sequel looks even better. Zooming in close to the action reveals historically accurate uniforms and vehicles, all incredibly detailed, while the destructible environments are modelled in such a way that they never seem to crumble the same way twice. New weather effects, taking note of the Eastern front’s harsh climate, are more than just visual touches too – snowstorms will obscure your troops’ view and force them back to camp for fear of freezing, while forces silly enough to stand upon frozen lakes and rivers do so at the risk of being submerged in their icy depths below. 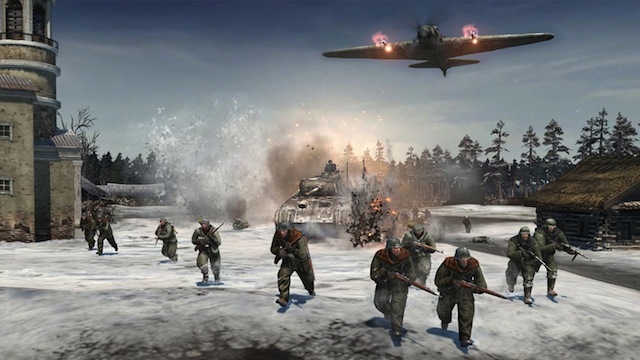 The sound design here is incredible too. From the ping of gunfire to the boom of a mortar strike, the crash of debris and the rain of bomb-churned dirt clods, you’re transported right into the thick of the action.

But it hasn’t all worked for the sequel, where some of the new additions have caused problems for the campaign.

While attempting to deliver a supreme level of authenticity to the experience, developers Relic Entertainment run the risk of derailing the campaign’s fun. As was true of the Soviet forces at the time, poorly trained conscripts make up a large portion of your armies, and can easily be pooled from the edges of the game’s maps to soak up fire while your more accomplished troops do the more intricate work. It’s an interesting mechanic, one that mirrors somewhat the make-up of Soviet forces at the time, but also runs the risk of unbalancing the entire game – though weak, they’re plentiful, and clumping your best troops in the middle of a swarm of conscripts is sometimes enough to “cheat” your way through some of the more challenging portions of missions. 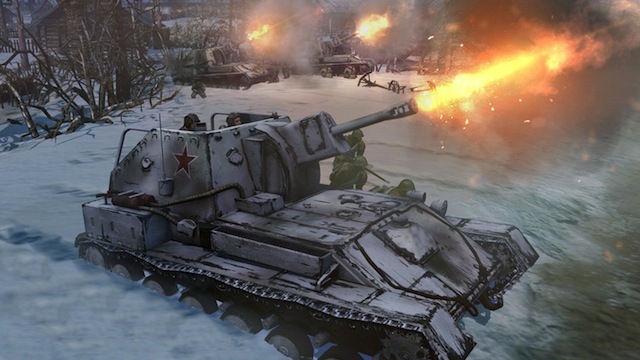 With the population cap (along with munitions, fuel and manpower) being one of few the resources that must be managed in the game, Relic Entertainment have also introduced NKVD officers. Any weakened conscripts you cause to retreat will be sent back past this commissar, who will unceremoniously execute them for desertion, freeing up your population count. Bizarrely, this is the primary method for upgrading your conscript forces too, with the more deserters shot leading to better trained conscript forces entering the fray. Battlefield executions were indeed far too common during the conflict, but to tie it to a skill progression system seems tonally awkward, to say the least. Either way, it’s a system that sometimes breaks down – the game’s line-of-sight system (often brilliant as it requires troops to be placed precisely in order to effectively fire upon enemies) can sometimes help conscripts avoid their death sentences, simply by creeping out of sight, halting your future conscripts’ skill progression.

The campaign takes quite a long time to get into its stride too, with early missions having arbitrary win conditions as the Soviet forces are on the backfoot. It may be historically accurate, but it’s a soggy achievement to complete a mission through a successful retreat, employing Stalin’s “scorched earth” policy as you go. Later missions that focus on specific units (such as a memorable excursion with a sniper squad, and a challenging encounter with a panzer tank) fare far better. It’s sad that the first 7-or so hours of the 14 hour campaign feel so weak however. 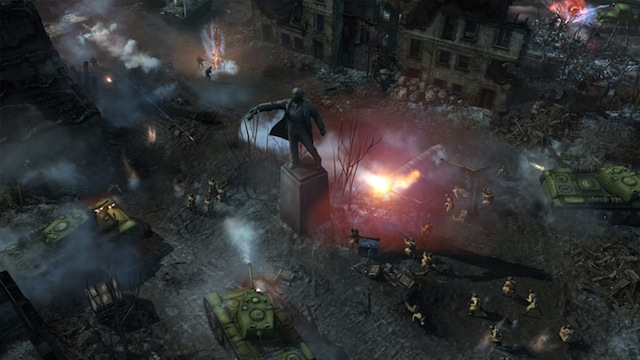 There are constant niggles across the entire game too that cause frustration, including weak pathfinding (troops favour a nice gravel path in front of an enemy machine gun trench rather than using rough terrain, despite the new ability to vault over low objects), and a UI that doesn’t make it easy to single out ready skill cooldowns among a large group of troops. Navigating larger battles can be a chore too, with the camera unable to zoom out far enough to jump from one battle front to the other efficiently.

The single player campaign’s issues extend to the delivery of its story. Cutscenes, using neither flashy CGI nor the game’s standard engine, look incredibly dated, while the delivery of what should be intense emotional moments is dampened by a cliche-ridden script and stunted animations. 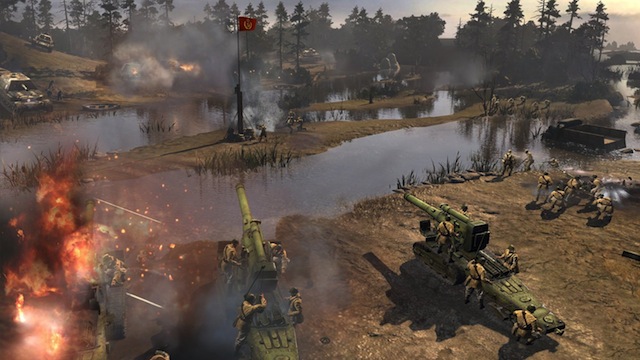 But that tells only half the story. If the campaign mode is patchy at best, multiplayer and the newly introduced Theatre of War mode are far more easily enjoyed.

Theatre of War mode has clearly been influenced by the Call of Duty series’ Special Ops missions. Quick-fire one-shot missions, they can be played either solo or co-operatively, and task you with completing focussed objectives. Avoiding the clumsy story of the main campaign and the feeling of shoehorned factional abilities, Relic has crafted some fiendishly fun scenarios to overcome. From a gloriously explosive artillery strike against German battlements to a stand up fight against more experienced forces, Theatre of War delivers where the overwrought campaign stumbles. 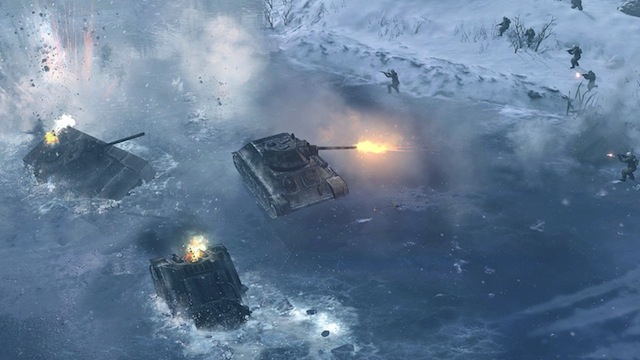 Multiplayer battles are incredibly exciting too. Splitting teams of up to four players per side into two opposing forces, you’ll battle for supremacy over supply points, scratching away at each other’s defences in order to keep supply lines safe. With success dependent on maintaining these supply points rather than wiping out your opponents’ forces, tactical strikes at weakened points is often a more effective strategy than swarming outposts en masse.

There are still some balancing issues to fix (tanks are overpowered, and mortars can be spammed, leading to boring encounters with less creative foes) but Company of Heroes’ classic strategising finds a harmonious balance with the new additions in multiplayer. Battling the weather and wily opponents, free from the stumbles of the game’s haphazard enemy AI, is exhilarating.

While the campaign mode is inconsistent both tonally, mechanically and visually, Company of Heroes 2 really shines in multiplayer and its Theatre of War missions. Whereas the single player mode frustrates and delights in equal measure, take the game online and you’ll be in for some of the most intense, strategically rewarding skirmishes you’ll ever play through. It’s far from perfect, but forgive the campaign its failings and there’s some incredible action to sink your teeth into in the other modes here.