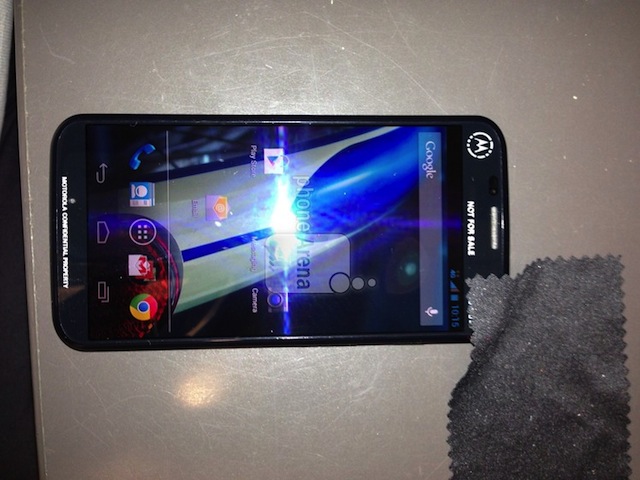 A smartphone device with the model number XT1506 from Motorola, alleged to be the long-rumoured Motorola X Phone, has leaked online at Phone Arena.

A leaked photo of the device that many expect is Motorola’s first true “Google Phone” after the mobile manufacturer was bought out by the search giants back in 2011 reveals at least one key feature of the upcoming phone: snapped being tested on Sprint’s 4G network, it reveals the handset’s LTE capabilities.

Previous leaks have suggested the smartphone’s screen size will sit somewhere between 4.5-inches and 4.7-inches, running at 720p resolution. A 1.7 GHz processor with an unspecified number of cores is also expected (likely quad), alongside 2GB of RAM and 16GB of storage.Wi-Fi and NFC capabilities are also expected, and though the handset is shown running Android 4.2.2, if it’s truly the fabled X Phone, it’s more likely to land running Android Key Lime Pie, the brand new build of Google’s mobile OS.

Though there’s still no official word on the handset form neither Google nor Motorola, an official launch is speculated to be taking place on 1 August. We’ll keep you posted.