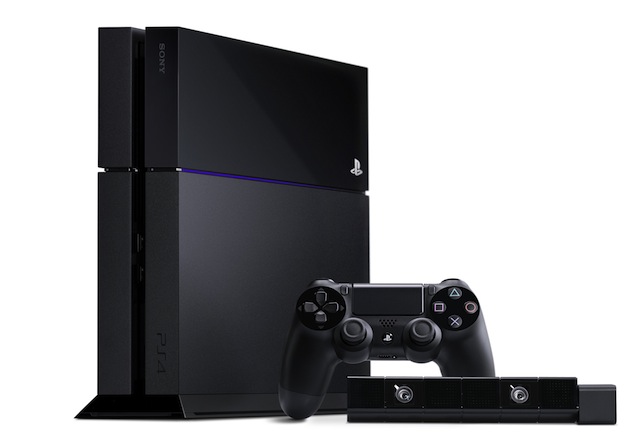 Sony came out all guns blazing at their E3 2013 press conference for their new PlayStation 4 console last night, delivering a crowd-pleasing look at their next-generation machine.

First, up, the long-awaited unveiling of the machine itself. Another black box more close in design style to the PlayStation 2 than PlayStation 3, the PS4 has an angular, slanted form that can sit horizontally or vertically, with sizeable openings on one side for ventilation. As well as the already-unveiled DualShock 4 controller, the company also showed off the console’s new camera accessory. Both the camera and the console are slightly smaller than their Xbox One counterparts.

Scroll down for more images of the PlayStation 4 hardware.

Sony also took the time to solidify their stance on the used game market, and game ownership in general.

“We believe in the model that people embrace today with PlayStation 3 and will continue to demand,” said Sony exec Jack Tretton, before revealing that the console will have no new used game or game lending restrictions beyond what is already in place on the PlayStation 3, something that could be a massive selling point considering Microsoft’s very rigid stance on the matter. Likewise, the PlayStation 4 will not require internet authentication in order to play single player games.

Sony have the Xbox One trumped on price too. Whereas Microsoft’s console will cost £429 in the UK, Sony’s machine will be £80 cheaper at £349.

It’s set set to launch “in the holiday period”. With Microsoft’s machine pinned down most likely for an early November launch, it will now be massively important who can get a headstart and hit shops first, courting consumer’s cash first.

All in though, Sony seemed to tick every box at E3 with what gamers wanted to hear. Good job.