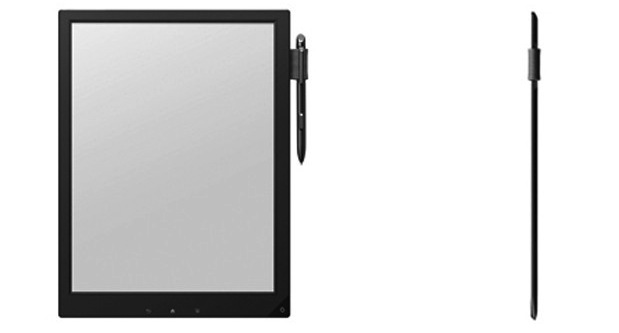 If you’ve ever put your back out lugging texbooks and notepads from lecture to lecture at university, you’ll be wanting to give Sony a great big round of applause for their latest prototype gadget. The company are trialling a new E-Ink notepad that could potentially take the weight out of student rucksacks the world over.

Offering a Kindle-like 13.3-inch E-Ink touchscreen display and stylus, the slate is roughly the size of an A4 writing pad and far thinner and lighter at 6.8mm and 358g.

With a 1200×1600 resolution and 4GB of onboard storage, the idea is that the pad not only can be used to take handwritten notes, but could also be used to house textbooks and novels being studied, letting students add digital notes to the texts. A whole degrees worth of books and PDF notes could be carried on the lightweight device at once, with microSD expansion supported should it be needed.

Wi-Fi too is onboard, and will presumably allow for web browsing on the device and potentially the syncing of files between the slate and computers or other mobile devices.

Currently being tried out in Japanese universities, Sony plan to have the device on sale at some point before March 2014.