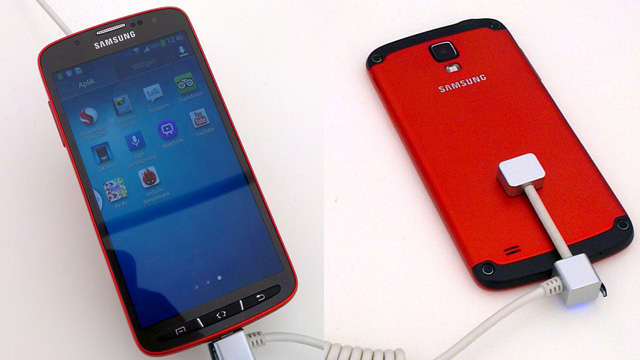 The Samsung Galaxy S4 is many things, but tough it is not, as many a drop test has proved. Seemingly taking note of it’s slightly weedy defences, Samsung have supposedly put together the Samsung Galaxy S4 Active, a ruggedised version of their flagship smartphone, with its specs leaking online.

Photos picked up alongside a spec sheet by GSMArena show the Galaxy S4 to be very similar to the regular edition, with the introduction of dust and water-proofing and a striking red casing.

Each corner is protected from drops by a supporting rivet, while a plastic cover keeps the charging port from being exposed to the elements. Rubberised buttons are in play instead of touch ones too, letting them work underwater.

Under the hood the phone sounds impressive too, supposedly sporting a 1.9GHz quad-core processor, a 5-inch full HD screen and an 8MP camera on the rear (a bit of a downgrade from the 13MP sensor on the standard S4).

All in, looking far more attractive a prospect than your standard rugged phone. We’ll bring you any details of an official launch and UK-specific pricing and features if and when we receive them.