Donkey Kong Country Returns 3D sees one of the Wii’s most challenging and beloved platform games squeezed onto a Nintendo 3DS cartridge and given a 3D makeover. But has this modern-classic lost anything in translation to the handheld format, and is there any reason for owners of the Wii original to return to Kong’s country? Read our full review to find out!

If you’re a Wii-owning platforming fan, there’s a good chance you already know much of what there is to know about Donkey Kong Country Returns 3D. As a Nintendo 3DS handheld port of 2010’s critically acclaimed Donkey Kong Country Returns, owners of the older Wii version of the game will have, aside from a few gameplay tweaks and a couple of added levels stuck onto the end, likely seen practically all this 3DS remake has to offer. It’s very much a refinement rather than an overhaul. 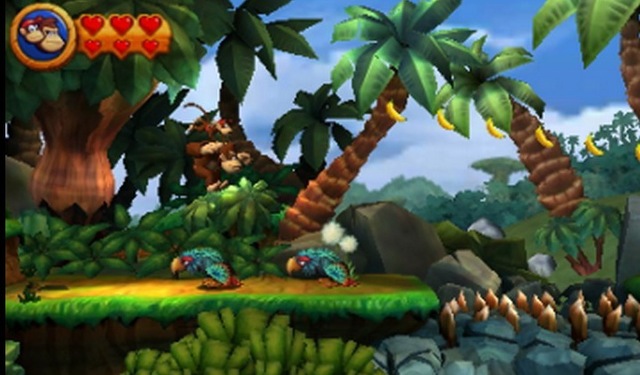 And that’s no bad thing when you’re refining something as good as Donkey Kong Country Returns. As the old adage goes, “if it ain’t broke, don’t fix it”, and this 3DS version perfectly shrinks down the jungle hijinks of the Wii game for handheld play without losing anything in the process.

A side-scrolling platformer in the vein of DK’s Super Nintendo adventures, the game kicks off in classic Donkey Kong fashion, with the tie-wearing primate discovering that his prized banana horde has been stolen and his jungle buddies turned against him, this time thanks to the voodoo magic of the floating Tik Tak Tribe. From the start, the game’s humour pours forth and sets it apart from the Mario series; hilariously animated, Donkey Kong is too dense to fall foul of the Tik Tak’s hypnotic charms, blasting their leader through the wooden door of his hut.

From here on, it’s vintage DK. You’ll run and jump through luscious green foliage, volcanic factories and Incan-like ruins, taking out bad guys with a palm-slapping ground-pound or shoulder roll, or a good old fashion jump onto the head. Barrels can be picked up and thrown at enemies too, and some will contain Donkey Kong’s little buddy Diddy Kong, who adds the ability to hover a short while at the peak of a leap thanks to a jet pack and doubling the number of hit points the pair can take before being sent back to a checkpoint. 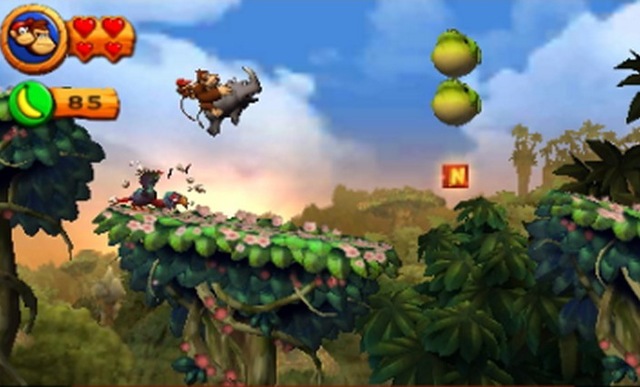 Other levels may see the duo blasted from explosive barrels to other floating canons, with the player having to time precisely the shot in order to avoid hovering obstacles or line up correctly with the next barrel, or clambering up vines that sometimes decorate the levels, letting you avoid spikes and uncover secret routes through stages. And, of course, the series signature break-neck mine cart runs return – on rails sequences where Donkey Kong hurtles down a rickety old track, leaping across chasms and avoiding traps laid by enemies.

Level design is greatly inventive, and, considering how almost all of the game design is the work of original developers Retro Studios rather than porters Monster Games, much of the praise again has to be heaped there. From devious traps to crumbling environments to some of the most devilishly hidden secrets with encountered in a platforming game, it’s a masterclass in how to pack out a 2D side-scroller with inventive, interesting challenges.

Boss fights are great. Though they follow the “hit-till-defeated” pattern of most platforming bosses, they scale up in difficulty perfectly, challenging you to put into practice all the techniques you’ve mastered in the run up to confronting them.

It also looks fantastic too. Each Kong and all the enemies are animated excellently, with fantastic charm running through each character, with cutscenes that have a perfect sense of comic timing. There’s life in every frame of the jam-packed levels, with small animations often offering a cue to hidden secrets in the level for eagle-eyed gamers. There are some wonderful stylistic choices too found throughout the game, such as levels where the setting sun means all that can be seen of the Kongs is the red of their clothing against their silhouetted figures. It’s stunning. 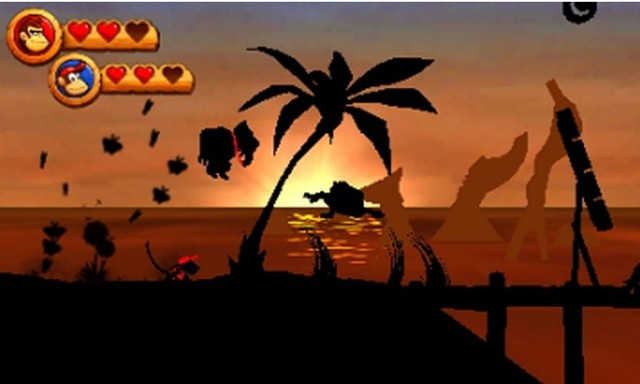 Monster Game’s implementation of the Nintendo 3DS’s stereoscopic 3D effects work impressively well too. The original game’s level design already had a great sense of depth to it; though a 2D side-scroller, the Kongs’ movement down the fixed path of the levels often saw them move towards and away from the foreground, and the 3D effect here captures that sense of deepness and distance perfectly.

For the most part, Monster Game’s work has been to make the game more accessible to newcomers. Make no mistake, Donkey Kong Country Returns was one of the most challenging platformers we’d ever come across, with the sort of “throw-the-controller-at-the-wall” difficulty levels that some gamers love and some detest.

Donkey Kong Country 3D then includes two different difficulty levels: the punishing Wii original, and a more friendly new version that adds an extra hit point to both of the Kongs, allowing for a maximum of six hits when Diddy Kong is in play. There’s also a wider variety of helpful items available from grizzled old Cranky Kong’s shop (found inbetween some levels), allowing you to trade in coins found during stages for items that can help you find secrets or add more health, among other tricks. 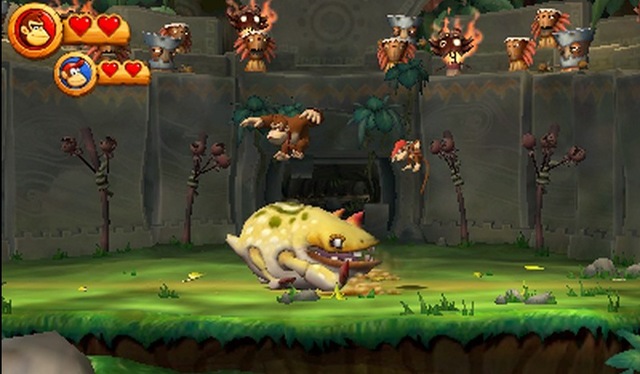 While slightly easier in this mode as a result, the game is still incredibly difficult. It’s not enemy hits that will fell your Kongs – it’s the gaping chasms and pinpoint timing of platforming sections that cause the most trouble, and many of these moments are instant-death falls. If you fall into an abyss, you’re transported back to the last checkpoint, which could be quite some way away. Even with the helping hand offered by items that let you recover from falls, you’re going to hit some massive difficulty hurdles that only the hardiest of gamers will overcome.

Thankfully, the game is so good that you’ll likely want to grit your teeth and plough on through. There’s so much to see in each level, and so much warmth to be found in the game, that only the most jaded of players will give up on the chance to seeing what new delights wait around the corner.

And then, hopefully, you’ll beat the game, and come up against the handful of new sadistically difficult levels put together by Monster Games. They fit perfectly into the world created by Retro Studios, and make the original game’s most fiendish levels look like a walk in the park. It’s probably not enough new content to tempt owners of the original Wii title back, but those that get that far will feel a great sense of achievement when they overcome the challenges that lay in wait at the game’s end.

There’s a mighty challenge to be found with Donkey Kong Country Returns 3D, and even with the reduced difficulty level only the hardiest of players may see the game through to the credits roll. But you’ll never regret a moment of playtime with the game, even if it’s going over difficult sections repeatedly. There’s a charm here that’s all Kong’s own, with beautiful level design and cleverly hidden secrets making this title a perfect platforming alternative to Mario’s 2D handheld adventures.