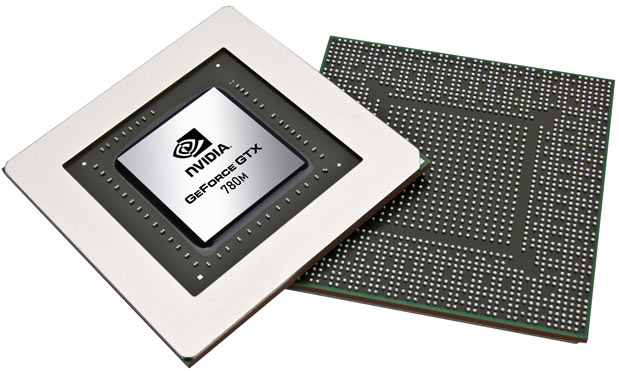 Nvidia have lifted the covers off their GeForce GTX 700M notebook GPUs, promising to deliver the fastest gaming speeds in the thinnest gaming laptops ever.

Headlined by the GeForce GTX 780M (which Nvidia claim is the fastest notebook GPU based on full HD 3D Mark Fire Strike benchmarks against a rival AMD Radeon 8970M), all new chipsets are based on Nvidia’s impressive Kepler architecture. Looking at the GTX 780M’s numbers, you’ve got packed in here 1,536 CUDA cores, an 823MHz base clock speed and memory configurations of up to 4GB of 256-bit GDDR5; verging on desktop territory.

All also include new technologies to enhance and adjust performance on the fly.

These include Nvidia Optimus technology, which extends laptop battery life by switching on the GPU only when it is needed, Nvidia GPU Boost 2.0, which dynamically adjusts the GPU clock speed to improve performance, and the new GeForce Experience software, which adjusts in-game settings to find the best possible balance between stable performance and visual fidelity.

But with the launch of Intel’s Haswell processors looming, which claim to offer integrated graphics performance on a par with dedicated GPUs, will Nvidia’s latest efforts be redundant? Naturally, Nvidia’s Rene Haas, VP and GM of computing, thinks otherwise.

“If you’re talking about gaming, which is the most popular usage for GPUs, Haswell falls far short of GeForce,” he said.

“We expect well over half of today’s games won’t play at standard resolutions on Haswell. That’s nothing new. Two generations ago, Sandy Bridge couldn’t play roughly half the games of 2010; Ivy Bridge had the same problem with the newer games of 2011. Any serious gamer will tell you that integrated graphics is far from adequate for delivering a reasonable, let alone good experience. Haswell won’t change that.”

Haswell will have benefits for Nvidia’s notebook business however, Haas suggests:

“Haswell is a great CPU, and that actually helps us. We have a much higher market share on Intel platforms versus that of AMD, so to the extent Haswell is successful competing with AMD, we’ll do well. We had a record number of design wins with Ivy Bridge, and I expect we’ll have at least as many designs with Haswell. In fact we have over 95% of the gaming notebooks this refresh, so things are starting off great.”