Dishonored, one of last year’s top games, gets its first meaty story expansion with The Knife of Dunwall. Putting you in the shoes of antagonist Daud, can it reach the lofty heights of the main game?

There’s always a distinct relish to be had in donning the guise of the bad guy. Be it swinging Darth Vader’s red sabre in the opening act of Star Wars: The Force Unleashed, or shambling around as a Left 4 Dead zombie, it sometimes just feels a little bit cooler to be dispatching the goody-two-shoes of gaming rather than playing as them.

Dishonored’s latest DLC pack, The Knife of Dunwall, knows this all too well. You take on the role of Daud, one of the main game’s antagonists, responsible for the assassination of Dunwall’s empress, exploring his motives and regrets. And spilling a fair amount of claret along the way. 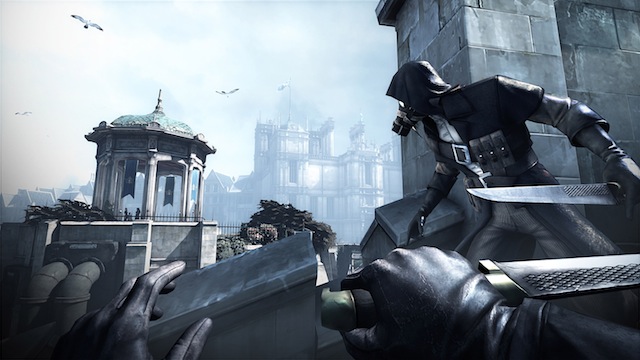 There’s a markedly different feel to the action in The Knife of Dunwall. Though there’s still ample room for experimentation and multiple stealthy routes to each goal, the focus here seems much more action and combat orientated. Daud’s moveset and skills lean towards bloodier solutions to problems; satisfyingly grisly, if often not quite as smart as the original’s.

For instance, there’s no longer the swarm ability at your disposal, replaced by a call for aid from assassins to fight by your side. A new vision mode is introduced too, not quite as interesting as the mysterious secrets that could be uncovered by Dishonored’s heart. 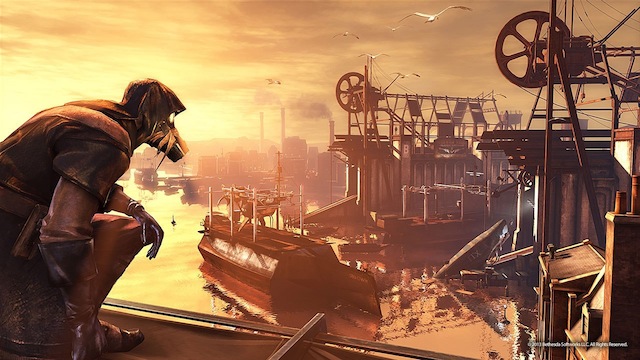 Where Daud has Dishonored’s hero Corvo beat however is in his arsenal of gadgets. Again, they’re combat focussed, but all bring a smile to the face. From the laser-like Arc Mines that disintegrate any guards hapless enough to walk into their range to the ninja-like Chokedust grenades that produce a veil of cover within which to dispatch your foes, Daud is like a steampunk Batman.

But even with these tools at your disposal, this DLC pack truly ramps up the challenge compared to the fairly-easy main campaign. Guard patrol routes are more complex and numerous, as are the waves of enemies that will attack should you be routed during your covert exploits. Be prepared for some trial and error that will push all but the most masterful of Dishonored experts beyond the 5 hour mark before bringing the DLC to its conclusion. 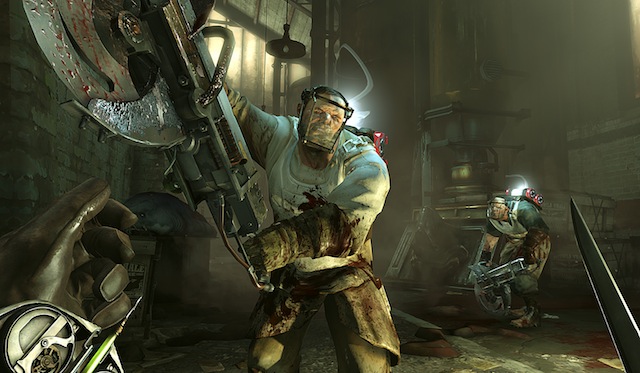 Though The Knife of Dunwall inevitably recycles assets and locations, the new Rothwild Slaughterhouse area is truly spectacular. A towering warehouse in the middle of an industrial dispute, it’s beautifully lit in an evening glow, and filled with the spoils of Dunwall’s whaling industry. There are multiple pathways across each location, be they pipework walkways or blood-tinged sewer networks, and a wide courtyard expanse littered with opportunities to flex your stealthy muscles in. Engaging in sword fights with the buzzsaw-armed butchers employed in the slaughterhouse is also a thrilling challenge.

If there’s one real disappointment here, it’s with the progression of this concurrent storyline. Running parallel to Dishonored main narrative, Reservoir Dogs’ Michael Madsen excels as Daud, giving a convincing performance as the conflicted assassin. However, the inner turmoil Daud experiences is never fully fleshed out, and the thrust of his tale falls a few points of exposition short of being satisfying. With Knife of Dunwall planned as a two-parter, here’s hoping Daud’s perspective will be expanded upon in the next DLC pack.

Though the meat of Daud’s story is only teased in this DLC pack, The Knife of Dunwall is a worthy expansion for one of last year’s best games. Focussing on combat over stealth, taking on the role of Daud and his wide arsenal of gadgetry is good fun, with the slaughterhouse a location as good as any in the main game. Roll on Knife of Dunwall: Part 2!