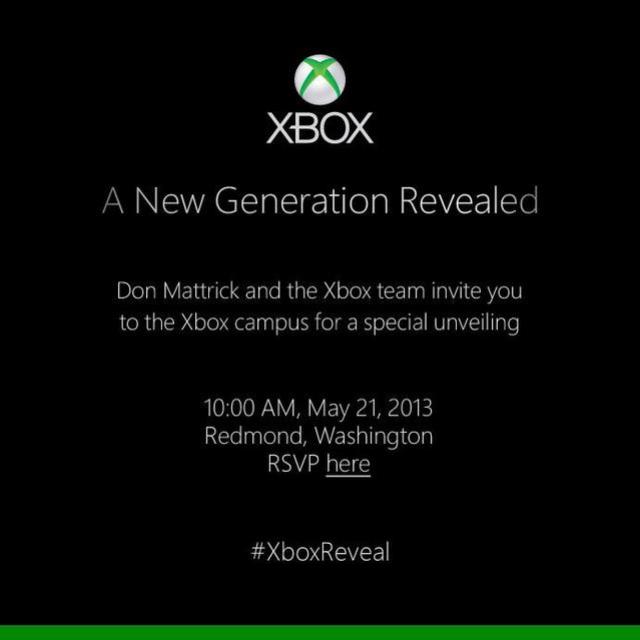 It’s official: Microsoft will be unveiling the successor to their Xbox 360 console at an event on 21 May 2013, to be held at the company’s Redmond campus.

The console, tentatively titled the Xbox 720 and known to developers by its codename Durango, is expected to go head-to-head with Sony’s PlayStation 4 in the battle to be the top of Christmas lists the world over by the holiday period of this year.

“On Tuesday May 21st, we’ll mark the beginning of a new generation of games, TV and entertainment,” , Xbox spokesperson Major Nelson said on his official company blog.

“On that day, we’ll be holding a special press event on the Xbox campus and we invite you to join us via the live global stream that will be available on Xbox.com, Xbox LIVE and broadcast on Spike TV if you are in the US or Canada.”

“On that day, we’ll share our vision for Xbox, and give you a real taste of the future. Then, 19-days later at the Electronic Entertainment Expo (E3) in Los Angeles, we’ll continue the conversation and showcase our full line-up of blockbuster games.”

Little is known for certain about the console, though much has been speculated. Many are expecting the next-gen Xbox to be equipped with an eight-core processor and 8GB of RAM, and 800MHz graphics processor and a Blu-ray disc drive for games and movie playback. TV and entertainment apps will feature heavily also as Microsoft look to gain more influence over living rooms, while the console has also been rumoured to require a constant internet connection, much to the dismay of gamers burnt by recent “always-on” game launches such as Diablo III and SimCity.

The 21 May Xbox event will kick off at 10am PST (5pm GMT). Tech Digest will be bringing you full analysis of all the announcements made. Hold onto your butts gamers: