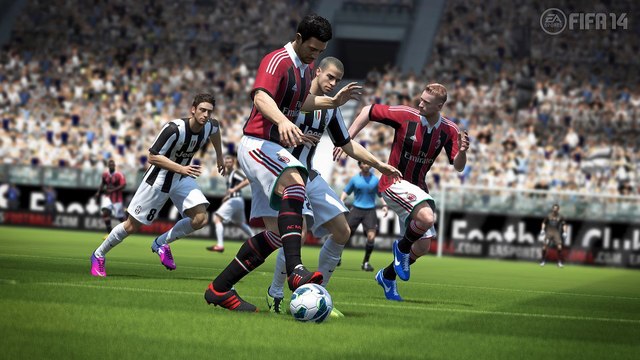 EA have revealed that the latest instalment in their world-conquering footie simulation series, FIFA 14, will hit the Xbox 360, PS3 and PC later this year.

So far there’s been no word on any next-gen PS4 or Xbox 720 FIFA 14 versions, but we’d expect that to change soon, likely with a separate reveal closer to the console launches, or at this summer’s E3 show.

So what’s new for FIFA 14? Well, aside from the usual team and kit updates, the development team at EA Sports Vancouver will be focussing on adding to the build-up play features in the game, moving on from the route-one focus of FIFA 13. 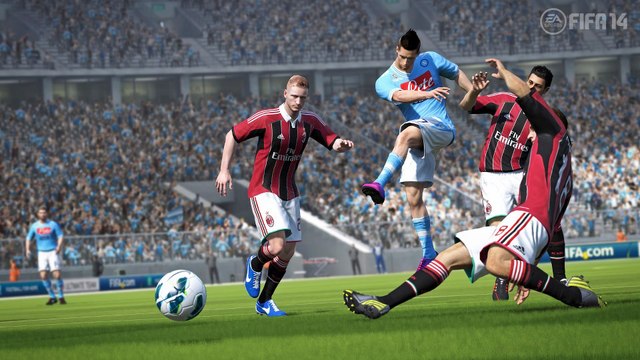 Helping this along the way will be full 360 sprint-dribbling, giving you complete control over players as they move at speed, as well as when the ball’s trapped at their feet or when jogging.

To keep things fair, momentum will now come into play when sprinting, meaning players won’t be able to turn whilst running at full speed without consequences based on their stats. Shifting weights and attempts to maintain balance will all come into play.

Teammate AI is improved both for attacking and defending, helping build-up play and covering your back following attacks. The new AI engine tracks multiple frames of gameplay as opposed to single ones, allowing them to anticipate and predict your (or opponents) intentions and react accordingly.

Shooting will be overhauled too. Improved visual feedback will help new players fine tune their shooting skills, with digital players adjusting their feet and stride ahead of a shot attempt. Ball physics have changed too, allowing for a greater array of shot types and a more realistic flight when the ball is in the air, which will also aid those looking to pull off pin-point crosses.

Those are the big gameplay features, but expect a host of interface and mode tweaks too, including a simplified Career mode interface that makes scouting for new players much easier.

Another solid set of improvements by the looks of things. Of course, the real test will be how well the game fares upon its inevitable next-gen reveal, but those not looking to upgrade their gaming hardware this winter will at least be sure to have another season of quality football ahead of them. We’ll be bringing you more on FIFA 14 in the coming weeks and months.

Scroll down for the first images from the game.