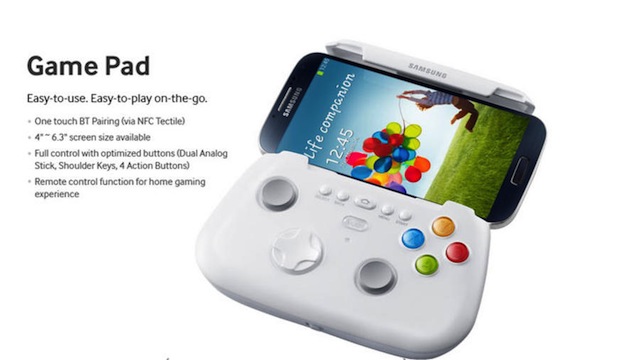 As well as revealing the new Samsung Galaxy S4 handset last night, Samsung also revealed a slew of new accessories to accompany the flagship smartphone. One in particular, the Samsung Game Pad, caught our attention, but not necessarily in the way Samsung intended.

What is interesting however is the supported screen sizes. Though currently being sold as an accessory for the Galaxy S4, the Game Pad supports screens as large as 6.3-inches. With the Samsung Galaxy S4 only having a 5-inch screen, are Samsung future-proofing the device to be compatible with a 6.3-inch Galaxy Note 3 handset?

The only way is up in terms of screen size for Samsung’s Galaxy Note line, with the first generation housing a large 5.3-inch screen and the Galaxy Note 2 packing in a monster 5.5-inch display. Though initially seen as something of a novelty, the stylus-packing Galaxy Note range has sold incredibly well, with consumer confidence in the oversized “phablet” design leading many to believe the Note 3 will be upwards of 6-inches in size. The Game Pad certainly supports such a suggestion.

We’re expecting to see more on the Galaxy Note 3 in the Autumn. Check back in the coming weeks and months to see if it’ll fit the Game Pad as more on the forthcoming handset is revealed.