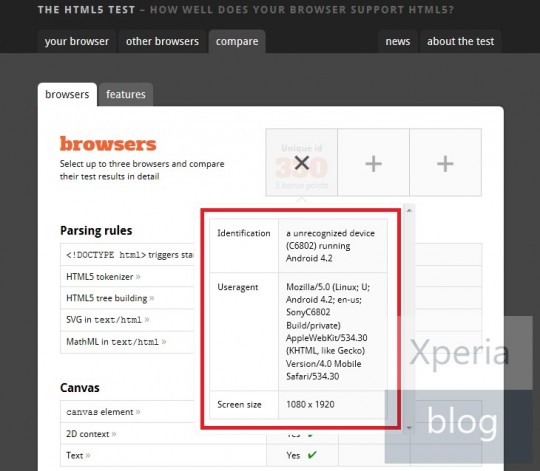 Sony made big waves at this year’s CES 2013 conference, thanks in part to the unveiling of the impressive-looking Sony Xperia Z smartphone. While we’re still waiting for pricing and the March 1st release of that 5-inch, 1080p handset, it looks like we may already have the first snippets of information on its successor.

The handset in question is codenamed the Sony C6802, which has appeared in a test listing spotted by Android Community over at the HTML 5 Test Website.

The belief that the C6802 could be an Xperia Z sequel arises from its codename. Sony class the Xperia Z as a C660x series handset. The numeric jump here to a C680x codename convention suggests the handset could be a successor.

The listing shows an Android Jelly Bean 4.2 device with a display running at 1920×1080 resolution. There’s little else to go on so far, and there remains the strong possibility that the results have been faked.

Still, the warm reception given to the Xperia Z ahead of release would likely see Sony lining up a whole family of Xperia Z handsets. It’s quite possible that while the C6802 may not be a new flagship from Sony, it could prove to be a cheaper variant, perhaps slightly smaller than the 5-inch size of Xperia Z.

A rumour very much in its infancy, we’ll keep you posted with any fresh details on the potential Xperia Z sequel as we hear them.