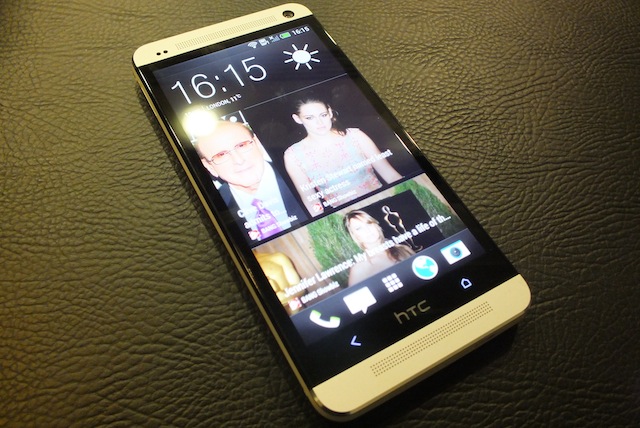 HTC’s latest flagship phone, the HTC One, has officially been revealed following a series of leaks over the past few weeks. It’ll launch around the world in 80 countries from 185 operators and retailers from March, with pre-orders opening today.

Previously known by the HTC M7 codename, the handset sports a new version of HTC’s Sense UI Android re-skinning, described as “clean, modern and readable.” It introduces the Blink feed, a stream of live information that can scroll vertically on the home screen, not unlike the Windows Phone 8 Live Tiles concept, tying into content from many Android apps, including a partnership with AOL for media content.

In terms of design, the handset is “virtually all metal”, integrating the antenna into the aluminium chassis for a seamless unibody design. It’s just 4mm thick at its thinnest point.

The hotly-tipped camera system foregoes the importance of megapixels, favouring pixel size, rather than pixel count. They call it “UltraPixels”, pulling in 300% more light than regular pixels and boasting HDR video capabilities as well as HDR still photography. In theory, shots with the HTC One should be sharper and brighter in low-light conditions than with rival smartphones.

The camera system also uses a feature called HTC Zoe, capturing both still shots and HD video at the same time, in turn offering an animated image gallery within the phone rather than a simple list of static images. The phone will also automatically create short highlight reels to post to social networks.

The HTC One will also house an Infra-red sensor for controlling home theatre products such as televisions, home cinema speakers and any other product that uses an IR sensor.

“HTC have been on an amazing journey these past few years. HTC has always been bold and we’ve never been afraid to take risks,” said Chou.

“People are using their smartphones more than ever, and more importantly, in new ways. They’re always looking for a constant flow of information, and are looking more and more towards video.

HTC’s fortunes have faded since the heady days of their HTC Desire successes. Though critically acclaimed, the HTC One series phones, released last year, failed to meet sales expectations, and HTC profits have steadily fallen quarter-on-quarter. While HTC haven’t reached BlackBerry levels of desperation, the HTC One could still be seen as the company’s own “BlackBerry Z10” moment – a handset upon which the company are resting much of their hope.

As an Android handset, the HTC One will also face stiff competition from rivals Samsung, who are expected to reveal their Samsung Galaxy S4 handset on March 14th. The successor to the über popular Galaxy S3, it’s expected to surpass the successes of its popular predecessor.

We’ll have a full hands-on with the phone, as well as tons of photos and analysis over the next few hours, so keep glued to Tech Digest for more.