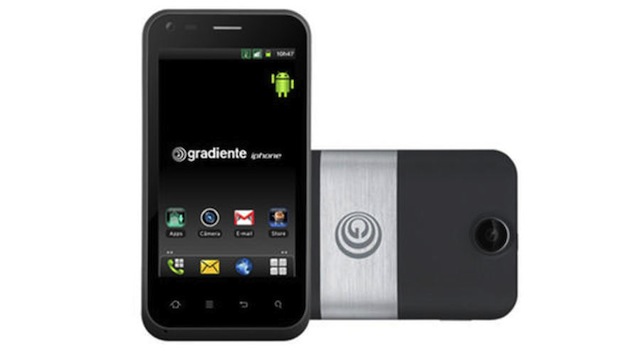 iPhones in Brazil may soon look very, very different to the ones Apple are currently selling, as the Cupertino firm may be set to lose the trademark to a rival Brazilian manufacturer.

The Institute of Industrial Property (INPI) in Brazil has awarded the name’s exclusive rights to Gradient Eletronica, who trademarked the iPhone name way back in 2000, long before the 2007 launch of the original Apple iPhone.

To make maters worse, Gradient Eletronica have begun selling an “iPhone” handset of their own, the “iPhone Neo One”, pictured above. Rubbing salt into Apple’s wounds, it’s a dated Android smartphone, running the Gingerbread version of the OS off a 700MHz processor, with a 5MP camera and 3.7-inch 320×480 display – hardly of Retina standards.

Apple have already begun the appeal process, arguing that Gradiente Eletronica had not begun using the name until December 2012.

As a slight consolation, Apple retain the rights to use the iPhone trademark in relation to clothing and software, and across publications.

However, Staub states that Apple have not reached out to his company. But with everything weighing in Gradient Eletronica’s favour, Apple may have to pull out their cheque book to get this issue fixed.