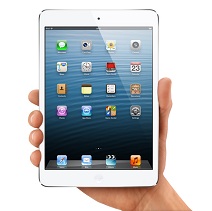 Apple’s iPad Mini quickly began to rival its full-size brethren in the popularity stakes when it went on sale back in November, but was left hamstrung by one important details: the lack of a Retina display, which meant even cheaper Android rivals like the Google Nexus 7 and Amazon Kindle Fire HD had sharper screens.

That oversight (or attempt to wrestle even more money from the hands of early adopters) looks set to be fixed with the launch of the iPad Mini 2 however. A Taiwanese-based Apple supplier has claimed that AU Optronics will be on manufacturing duties for the 7.9-inch iPad Mini 2, and will pop in an improved display running at 2048×1536 resolution for an easy-on-the-eye 324ppi.

If the iPad Mini could hold onto its £269 asking price and pack in a Retina display, it’d likely be a massive draw for consumers sitting on the fence or torn between the Mini’s portability and the full-fat iPad’s lush screen. Retaining the same 2048×1536 resolution as the full-size iPad would remove headaches for app developers too, who wouldn’t be required to tweak their apps very much in order to work with the new tablets.

Current rumours see the iPad Mini pencilled in for an October 2013 launch. Even for a rumoured launch, that’s a long way in the distance, so take these latest specs with a pinch of salt until we draw closer to confirmation, closer to launch.

In the meantime, why not check out our Google Nexus 7, Apple iPad Mini and Amazon Kindle Fire HD showdown? The battle of the seven-inch tablets may not have led to the victor you’d expect…