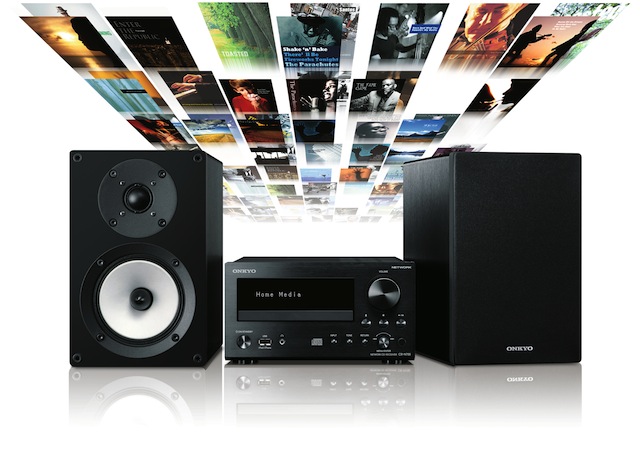 Moving swiftly with the times, Onkyo’s CR-N755 Hi-Fi receiver offers a full suite of online audio sources to enjoy. Read on to find out exactly why this forward-thinking receiver should be on your wishlist.

From smartphones to tablets to computers to games consoles, we’re spoilt for choice as to where to play our tunes from these days. And with so many of these devices being web connected, there’s no end of music streaming and online radio services to take advantage of too. Whereas some home audio brands seem lost in this deluge of networked options, Onkyo has thrown itself headfirst into the new networked era, and the company’s CR-N755 is all the better for it.

The CR-N755 ticks pretty much every box you’d want ticked by a modern receiver. As well as standard functionality like a CD player and FM and AM radio tuners, its networked capabilities open up access to all manner of online streaming services, with the receiver also playing nicely with files loaded onto USB sticks or those piped over the air from a DLNA compatible device. Though not included out of the box, you can add on additional Bluetooth and iPhone/iPod docking modules too if your wallet allows for it, letting you blast tracks from all sorts of mobile devices through the CR-N755 too. It’s a comprehensive offering.

Though we reviewed the CR-N755 as a standalone unit (priced in the region of £250 depending on the retailer), Onkyo also package the receiver with a pair of their D-055 speakers too for an extra £150 as the CS-N755 mini Hi-Fi system. If you’ve got a pair of speakers from another brand you’re happy with though there’s nothing stopping you hooking them up to the lone receiver and saving yourself a bit of cash. 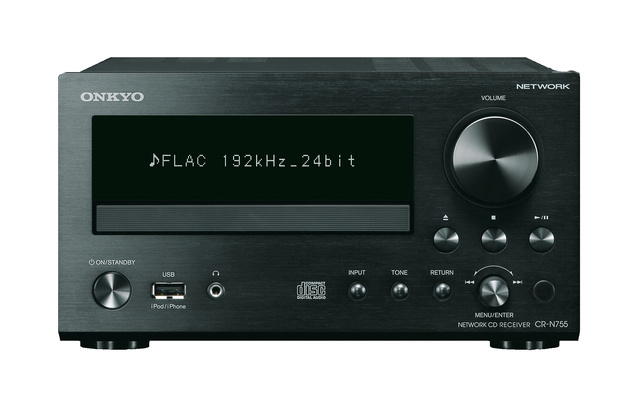 Onkyo get things off to a good start with the impressive build quality of the CR-N755. Sturdy and stylish (available in both black and brushed aluminium finishes), there’s a large volume knob on the left hand side and sizeable scrolling LED display panel to the right, with the slide-out disc tray sitting flush underneath the display. Playback, tone, input and return buttons click satisfyingly in the chassis, while a smaller dial lets you toggle through menu options. Alongside these front-facing controls is also a headphone jack and a USB port (which can also be used for hooking up an iPhone or iPod if you don’t fancy nabbing the dock).

Spin the CR-N755 around and you’ll find a wealth of connection options including two analogue stereo inputs and a single stereo output, coaxial and optical digital audio inputs, a subwoofer pre-out and a 3.5mm minijack input. A second USB port also sits on the back, presumably intended for Onkyo’s UWF-1 wireless LAN adapter or the UBT-1 Bluetooth adapter, seeing as these would likely be left connected rather than having you reach behind the unit every time you’re looking to plug a storage device in.

Also on the rear can be found an Ethernet port, which represents our one main gripe with the CR-N755. It’s the only out-of-the-box way to get the receiver online, other than grabbing the sold-separately and aforementioned UWF-1 wireless LAN adapter. For a receiver that sees its main draw as internet audio services, we’d have been happy to pay an extra premium for built in Wi-Fi rather than be tethered to a wired connection.

But what a wide selection of internet audio services they are! Onkyo have offered a fine array of tune providers here, including Last.fm, Spotify, Simfy, AUPEO! and MP3tunes, not to mention vTuner which opens the receiver up to untold internet radio stations. Though DAB is omitted, there’s little there that isn’t covered by this plethora of other services and online stations. 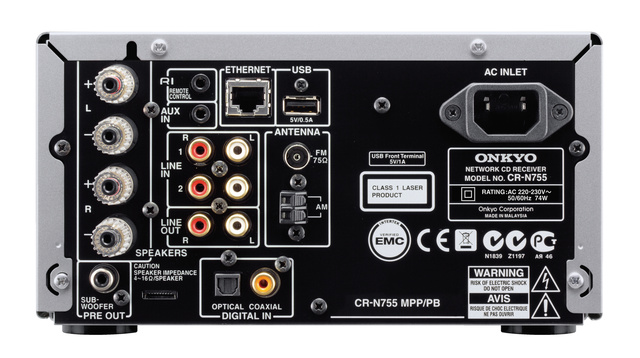 What does become a bit of a problem though is menu navigation and text input for these online services. Though all menus can be navigated and login details entered through the receiver’s dials and buttons, it’s a laborious process. The included remote control is sturdy, comfortable to use and superb for controlling playback, but little better when it comes to setting up the likes of Last.fm. Thankfully, Onkyo offer a free, clean and simple-to-use smartphone app for Android and iPhone users which removes any control clunkiness, making the set-up and browsing processes of internet services much, much more intuitive. However, if you’ve still yet to jump onboard the smartphone revolution, you’re going to have a headache controlling some of the elements on offer here.

Sonically, the CR-N755 is just as impressive as its feature list is long. Packing in a Three-Stage Inverted Darlington amp (the same circuitry found in their A/V kits) the CR-N755 can blast out two 22w channels at incredibly high volume without distorting. A 192kHz/24-bit audio DAC, symmetrical channel layout and gold-plated speaker posts all work together to keep interference to a minimum and to deliver a clear sound, while Phase-matching Bass Boost and Advanced Music Optimizer capabilities mean even compressed digital files sparkle. This all comes together wonderfully, resulting in a deep and warm bass response, dynamic mids and highs that are detailed without ever being harsh and smooth vocals from the default EQ settings. It’s a nice, balanced mix, meaning that you’ll be unlikely to need to tinker with the tone settings too much.

The CR-N755 is the modern Hi-Fi receiver done right. Oozing with features and countless audio source options, it’s let down only by its lack of a built-in wireless connection. It’s only a slight hiccup though in an otherwise comprehensive package, a receiver that sounds and looks as good as it is flexible. Great stuff.