Name: Ni No Kuni: Wrath of the White Witch

Professor Layton developers Level-5 team up with venerable animation house Studio Ghibli for PS3 exclusive JRPG Ni No Kuni: Wrath of the White Witch. Is the partnership the match made in heaven gamers dreamed it would be? Read our full review to find out!

I can’t remember the last time I played through a game with an almost permanent smile spread across my face. Ni No Kuni: Wrath of the White Witch made me do that with such ease so as to be disarming. A beautiful, magical, captivating game with a heart of gold, it’s helped restore faith in the fading JRPG genre for this lapsed fan. 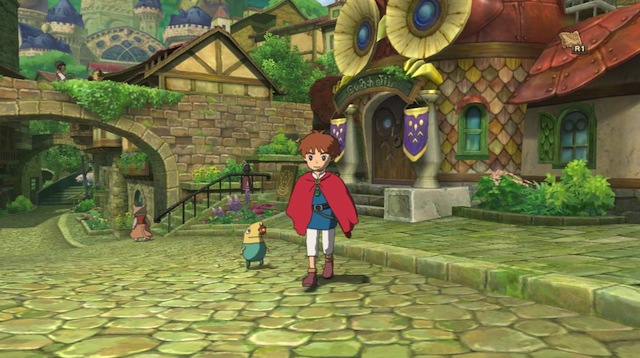 It’s difficult to talk about Ni No Kuni without first gushing about its visuals. From the off, it’s one of the most stunning games I’ve ever had the pleasure to play. It’s like running around within a Japanese anime film in 3D, one where every corner of its world has been drawn in painstaking detail. Though the game has been developed by Professor Layton makers Level-5, its visual style has been masterminded by Studio Ghibli. For the uninitiated, Studio Ghibli is one of if not the most revered animation house in the world, only rivalled by Disney in terms of influence, and responsible for classic animated flicks such as Spirited Away and My Neighbour Totoro. Every character, every creature, every town or forest you explore brims with imagination and charm. Even if you’re not into JRPGs, Ni No Kuni’s world will draw you in and keep you glued to the screen.

But a good JRPG needs, above all things, a strong story to keep your attention over tens of hours of gameplay. Thankfully, Ni No Kuni has this. Though firmly planted in the JRPG roots of old (oblivious hero must save the world from mysterious evil), Ni No Kuni takes a heart warming fairytale approach. Rather than a brooding, amnesiac adolescent with a talking gun blade or some such rubbish as its protagonist, Ni No Kuni focuses on a young, unassuming lad called Oliver, who lives with a loving family in the nondescript fictional US town of Motorville. Without spoiling things, Oliver soon finds himself in an unusual situation that sees him travelling between our world and a fantastical land in order to (you guessed it) save the world as we know it. But it’s Oliver’s good deeds as much as his “chosen one” status that will get the job done, and its a refreshingly uplifting tale to be a part of. Oliver is a good kid, caring and positive, and you’ll root for him and the colourful cast of characters he encounters on his journey. 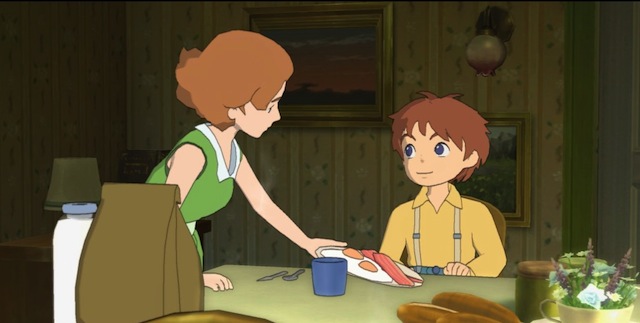 It’s not just a beautiful and well-told story though, as Ni No Kuni is also a blast to play. As with all JRPGs, combat is central to progression through Oliver’s quest, and developer Level-5 have smartly drawn influence from two mega-popular JRPG franchises in this department. Mixing Pokèmon’s creature-capturing with the “Tales of” series’ real-time 3D battle system, fights are speedy and strategically deep affairs. You’ll collect creatures called “Familiars” throughout the game, which can be given equipment and level up independently of Oliver and his pals. Familiars act as a buffer zone between you and bad guys, but you can also use Oliver to attack directly with magic attacks and target specific weak-spots or trigger items while the Familiars take the heat off you. For those put off by even the mere suggestion of a “Catch ‘Em All” mentality, Familiars are handled just right in the game; though there is an addictive element to discovering all the possible battle partners (and rewards for doing so), knuckling down with a core crew of favourites will get the job done just as well. It’s also a surprisingly active and accessible system, one that is flexible enough to keep your attention across the entire game. 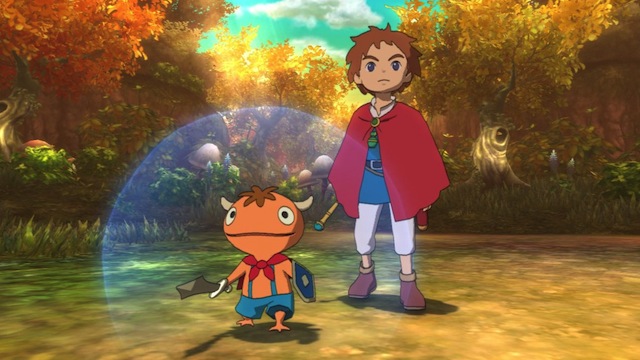 Though the main quest is linear, there are plenty of side quests waiting off the beaten track to take part in. You’ll get your standard fetch quests among them, as well “Hunt” missions tasking you with taking down specific enemies. But the most interesting ones are where Oliver has to help recover a person’s spirit. I don’t mean this in a “Ghostbusters” way, but rather something more akin to The Wizard of Oz, where Dorothy helps the Tin Man, Lion and Scarecrow gain heart, courage and brains respectively. Oliver goes out of his way to mend broken hearts or help people overcome their fears, and these missions offer superb incentives and rewards for taking part in. Oliver carries Merit Cards with him around the worlds he explores, and gathers stamps of approval from the people he helps along the way. As well as receiving items, equipment and coins for his good deeds, the Merit Cards, with enough stamps, can be turned in to unlock special rewards. These may be something as simple as a boost to experience points received, or improvements to core skills like Familiar capturing abilities. As well as often telling lovely, quirky stories, there are rewards to be won well worth the time investment that side quests represent.

Rounding off the experience is a well directed voice cast who bring each character and scene to life, every bit as good as one you’d expect from a Studio Ghibli flick. It’s a great localisation that feels natural and well considered, and likely accounts for the lengthy wait between Ni No Kuni’s Japanese and UK launches. A masterful score written by renowned Japanese composer Joe Hisaishi is full of varied and memorable tunes that you’ll be humming for days too, lusciously played out by the Tokyo Philharmonic Orchestra. 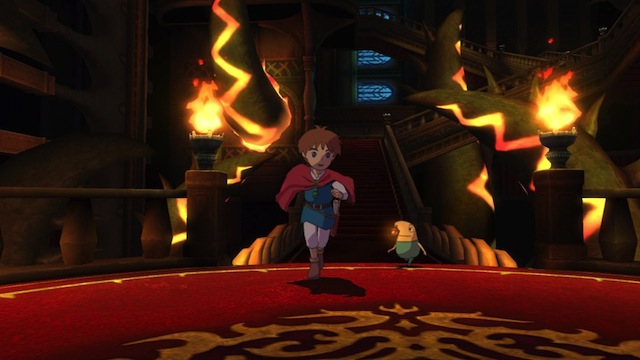 It’s also a lengthy game, one that will last easily 40 hours for a moderately comprehensive playthrough, and an adventure that could possibly stretch to twice as long for those committed to embarking on every side-quest.

It’s the care and attention seen at every level of Ni No Kuni’s design that elevate it above your typical JRPG fare. As a PS3 exclusive, PlayStation 3 owners will be the envy of every Xbox 360 owner that lays eyes on Ni No Kuni.

JRPGs are a dying breed, with western RPGs and their immediate action now capturing the imaginations of most gamers. Ni No Kuni: Wrath of the White Witch is one of the rare JRPGs of this console generation that manages to capture the spirit of old-school 16-bit titles like Final Fantasy VI while still managing to feel modern and relevant. An enchanting story with an absolutely stunning world you’ll want to explore every nook and cranny of, we can’t recommend Ni No Kuni highly enough.