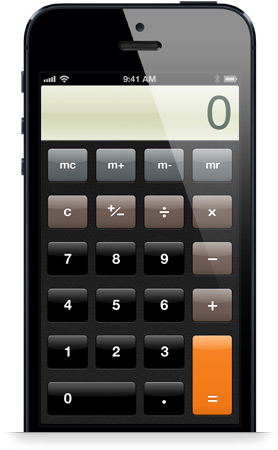 We’re fully expecting an iPhone 5S or iPhone 6 to launch this year, and we’re getting used to the rumours of a cheap iPhone also being in the works at Apple’s Cupertino HQ. But now there are whispers coming down the supply chain that a third handset may also be coming out of Apple’s stable this year, called the iPhone Math.

According to China Times, the iPhone Math will measure 4.8 inches in size, nearly an inch bigger than the current iPhone 5, and will be positioned as an alternative to large screen “phablet” devices from Samsung, LG, HTC and Sony.

While little is known about the device (and all should be taken with a pinch of salt) the source also claims that the handset will pack in an 8MP camera, provided by Largan Precision.

While the source does not make mention of the cheap iPhone that’s currently being touted, they do suggest another handset may launch late in the year ready for the holiday period, one packing a 12MP camera.

The iPhone 5S handset is said to launch alongside the iPhone Math, with manufacturing kicking off in March ahead of a June or July launch. Regular contractors Foxconn will be responsible for 90% of assembly duties.

This is the first time we’ve heard rumour of an iPhone Math device, but not the first time we’ve heard rumours of a larger screened iPhone, a rumour that came to fruition with the long-screened iPhone 5. Whereas Apple under Steve Jobs’ stewardship shied away from oversized handsets, with Jobs believing a 3.5-inch phone to be the size-sweetspot, post-Jobs Apple isn’t afraid to break away from their old sensei’s rules. As well as the iPhone 5’s change in design style, the iPad Mini likewise was a device we’d unlikely have seen during Jobs’ lifetime. With the Android market increasingly leaning towards large-screen devices such as the Samsung Galaxy Note 2 and Google Nexus 4, Apple may have to offer an option that will follow suit in order to keep up with the changing market.