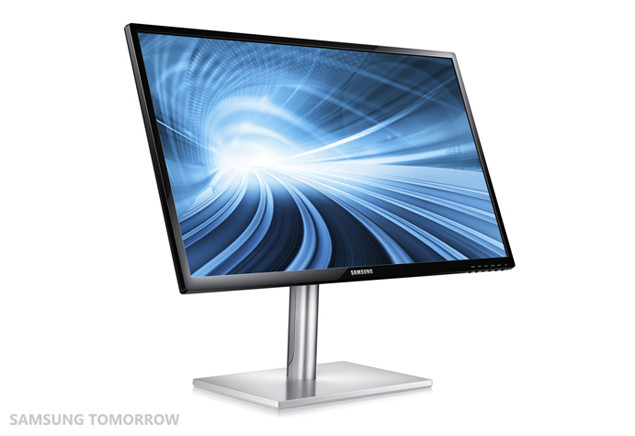 Samsung have done pretty well so far to keep this year’s big CES plans under wraps. But now less than a week to go until the 2013 exhibition opens its doors, the tech giants have revealed two new high-end monitors set to debut at the show.

A pair of new Series 7 monitors, the top-tier SC770 Touch Monitor has been optimised for Windows 8, being the first Samsung desktop monitor to offer multitouch controls.

Offering ten points of simultaneous contact, the SC770 measures 24 inches corner to corner, with a resolution of 1920 x 1080 and a contrast ratio of 5000:1. The SC770 will also house built-in speakers.

The second monitor, the SC750, lacks the multitouch controls, but shares the SC770’s 1080p HD resolution and 5000:1 contrast ratio. Slightly larger at 27-inches, the SC750 also features a pivoting stand that lets the user swap between portrait and landscape screen orientations. Those looking to grab the SC750 will have to purchase their own speakers, as they do not come built in as they do with the SC770.

No pricing has been revealed for the two monitors yet, though Samsung have stated that each will be available during the first quarter of 2013. Both Series 7 monitors will also be on show at next week’s CES 2013 exhibition.

Do you use a touchscreen monitor? Is it paired with Windows 8? Do you find it comfortable to use, and will you be considering grabbing one of these Samsung monitors when they become available? Let us know in the comments section below!